Aggressive Cat Behavior
Understand It To Cure It

Aggressive cat behavior can be frightening to see and to be the target of. So why does your little ball of cuddly fur suddenly become aggressive towards either you or other cats?

I have written this page to help you understand your cat better. That way you will be better able to help your pet overcome any problems which could be the cause of their extreme behavior.

We tend to forget that a feline is essentially an animal who can switch from being a loving domesticated, happy cat to a wild hunting animal.

However there are many reasons for aggressive cat behavior, some more instinctual than others.

Forms of stress and anxiety can be a major cause, and your goal should be to reduce or remove any source of undue stress for your pet. You can do this by following the tips on these web pages and checking with your vet.

This page includes information on: 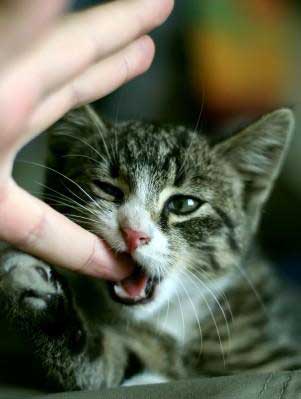 Luckily aggressive cats are a lot less dangerous than dogs, and a scratch or a bite will not usually cause us much injury.

However it is not pleasant to see children get scratched and possibly go on to become afraid of cats.

Most of us won’t be too affected by a bite or a scratch, but if not treated properly it may become septic.

The wound may also be infected with the Bartonella hensalae organism, which causes “cat scratch fever”.

For most people this is not serious and may only cause an enlargement of the lymph glands. However for people with a weakened immune system it could cause serious illness. So always thoroughly clean wounds and use an antiseptic cream.

Why did my cat attack me and how can I prevent it from happening again?

Injury: If your pet is normally a placid animal and then out of the blue starts to aggressive cat behavior towards you, the first thing to check is that they are not ill or in pain.

Run your hands along their body and tail gently but firmly to see if you can feel any cuts or lumps etc. Your pet may whince if they are in pain.

If you are still unsure and suspect that they may be ill, then a trip to the vet is probably the best thing to rule out any possible underlining illness.

While you are getting to the bottom of the problem, you might also consider trying a relaxing supplement such as Calm Care for Cats to help calm your kitty down.

Fear: If an animal is fearful they can strike out with aggressive cat behavior even if the target is not the cause of the fear. This fear could be caused by:

Play Aggression: If playing with your feline friend means a bloody and scratched hand every time, then you may have a cat that was either: 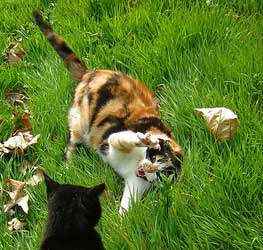 Predatory Cat Aggression: Normally in the wild, cats would pounce on birds and mice whilst hunting. However if your pet never gets the chance to go outside and hunt they may redirect this predatory aggressive cat behavior and begin to ambush your hands and feet - especially when you least expect it!

To stop this behavior put a bell onto a breakaway collar so that you can hear them coming and use startle techniques to interrupt their stalking behavior. Eventually they will learn that by attacking your feet etc they will be frightened and so will stop.

Petting and biting syndrome: Some cats will attack you if you simply try to stroke them. The acceptance of being stroked is a learned feline behavior and if a cat has not had much human contact throughout its life, especially in its first eight weeks, it will not be used to this contact and will feel threatened.

Make sure that you often spend some calm and quiet time with your pet and keep the physical contact short. If you see your cat tense up or flatten its ears, stop touching it immediately.

Then reward your cat with a treat when they have allowed you to stroke them. Over time they will learn that you are not going to hurt them and as they relax in your company they may begin to enjoy the odd tickle.

Aggressive Behavior Towards Other Cats?

Most people think that if cats don’t like each other it will always end up in aggressive cat behavior and a fight, but this is not necessarily so.

Generally they would prefer just to give each other a wide birth, as injury is something they would want to avoid. However it is inevitable that cats who don’t get on will cross paths and that cat fights will break out sometimes.

Territory: The most common cause of aggressive cat behavior amongst neighbourhood cats is conflicts over territory.

Unfortunately this can be impossible to prevent and the only thing you can do is to make sure that your cats are neutered and therefore less aggressive and to make sure that they are vaccinated every year to stave off any infections from bites and scratches.

Hierarchy: cats who are brought up together from kittens usually remain happy cats and get along with each other just fine.

From time to time however there may be disputes over who is the top cat in the household. This may be caused by stress or overcrowding.

Cats do like a place to call their own and if you haven’t provided them all with their own cushions etc then this will cause problems.

Introducing a new cat: Your existing cats nose will be put out of joint if a new animal is introduced to the house and they will show aggression towards the new intruder. This can be minimised as long as for the first week you keep the new cat confined to one room and separate from your other pet.

Calming herbal supplements such as Feline Matricalm could help in this type of situation, helping your pet feel less anxious until they have adjusted to the new situation.

Hopefully this will mean they don’t feel so threatened by each other when they do finally meet. Of course there is no guarantee that they will ever become best friends, but usually as long as they give each other space, there won’t be any aggressive cat behavior.