The Calicivirus is associated with the condition known as cat flu, but in its most severe form is a nasty, dangerous virus which can kill your cat.

This page will tell you about the main points you need to know about the virus and what symptoms to look out for. The sooner it is diagnosed the better the outcome.

I am not a vet but I would like to tell you the story about my own experience of this frightening illness. I had never heard of this illness before, but I will never forget it now, after all it nearly killed my two cats.

Once you know how horrible this virus can be, I hope you will feel able to speak to your vet about getting your lovely pet protected with the right cat vaccines every year. 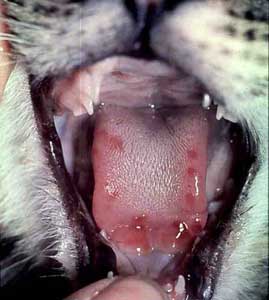 Some of the symptoms of the virus are similar to cat flu, such as:

In the more severe strains the following are also present:

The virus is very contagious and so is more prevalent where cats are kept in larger quantities, so catteries and animal shelters have to be very careful and keep their eyes peeled for the first signs of the illness.

However any cat that comes into contact with a carrier or infected cat may also contract the calicivirus.

Cats can remain contagious for 72 days or longer after infection even though they might not show any more symptoms themselves.

It is reported that a third of the cat population may be carriers of the virus meaning that it can spread very fast through a community.

Treatment of The Feline Calici Virus

Once a cat is infected with the virus all that can be done is for the cat's system such as  such as their kidney and liver function to be supported and for treatment of any secondary infections.

As with cat flu the cat needs to be kept well hydrated and in the less severe cases a fairly healthy cat will recover within 5 to 7 days. However the more severe cases can result in death regardless of any treatment provided.

Antibiotics are often prescribed to the cat to help with any infections which may arise secondary to the virus. It is therefore important that you visit your vet as soon as possible if you suspect your cat is suffering with cat flu like symptoms.

Regular cat vaccinations offer the best protection against this virus, but just like cat flu there are different strains of the virus out there. Every year new vaccines are produced to battle the new strains, your vet will always prescribe the newest vaccines available.

My Experience with Feline Calicivirus.

This is my recent experience with this nasty little virus. My aim is to make you aware of the calicivirus and its symptoms, but most of all to encourage you to speak to your vet about protecting your pet with the right cat vaccines.

I have two cats, Byron and Shelley, they are male, 2 years old and neutered. They are gentle and non aggressive cats who I rarely see get into any fights. 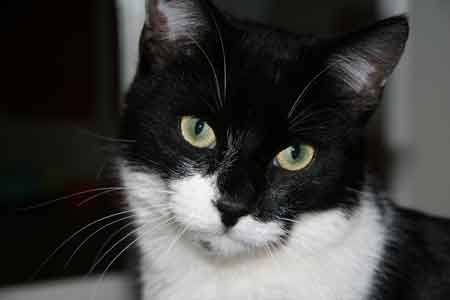 But one day Byron woke up and was holding his front right leg up. He hobbled around all day and so we booked him in that evening for a vet visit. The vet examined him and could not find the cause of the lameness but discovered that he had a very high temperature. Byron was given an anti-inflammatory and anti-biotic Injection.

The next day Shelley slept all day and didn’t move a muscle, not even to get food and this was very odd for Shelley. When he finally got up he could hardly walk, he was so stiff, and it was awful to see. Again we took them to the vets and he too had a very high temperature. After another set of injections the vet was still puzzled.

Saturday came and both cats had now stopped eating, even their favourite treats did not tempt them. Shelley was less stiff but Byron was still limping on the front leg. I was now getting worried about the fact that both cats had eaten little in three days and so off the vets they went again. The vet still could not work out what was wrong, gave some more anti inflammatory injections and told us that by Sunday they should be eating. 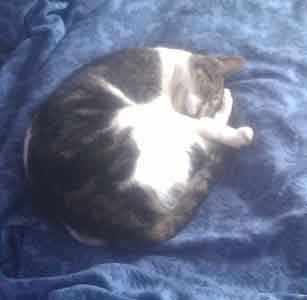 Well Sunday came and went and so did Monday and still both cats had eaten nothing. They would go to their bowls look at their food and back away. I began to suspect that their mouths were hurting them. On Tuesday we went back to the vets.

This time the vet discovered that both cats had terrible mouth ulcers. Byron was now jaundiced and both cats were severely dehydrated. Both cats were admitted to the vet hospital and put on drips.

The next day I was told that the vets suspected the Calicivirus and because of this had put both cats in quarantine as it was highly contagious. We were told that we could not see them and that in the mean time, blood tests and swabs were being taken to confirm the illness.

On Thursday the vets phoned me to say that both cats were very sick. Byron’s front legs had swollen up and were full of fluid and that they thought he may have pancreatitis too. I was also told that if the cats had the severe form of the virus that they could die. I was totally shocked.

Over the next five days we were not allowed to see the cats at all. We received daily reports of how they were getting on and all we could do was wait and see how the cats responded to treatment.

The tests came back and confirmed that it was Feline Calici virus. Our boys started to slowly improve and eventually were allowed to come home. Over the next week and a half the cats had to go back several times, their high temperatures hung around but the ulcers slowly went and so they could eat again and Byron’s lameness slowly went.

On our final visit to the vets we had a long discussion about the calicivirus. We were told that there were many strains of it and that it is constantly changing and mutating meaning that there was no one way to protect our cats from it.

We were told though that because we had had our cats vaccinated that they believe that is why they pulled through because they had some immunity against the virus but not the particular strain they had so that’s why they were ill but survived. Thank god we vaccinated.

The Importance of Cat Vaccinations Against Calicicvirus.

A discussion with my vet since has informed me that here in the UK the really nasty strains of the Feline Calicivirus have not yet been reported but that in the USA some very nasty cases have occurred and that the virus seems to be mutating.

In the severe cases the cats die or have to be euthanized.

Because of the new severity of the virus new cat vaccines are being developed and in fact I have been informed of a completely new one which is designed to help protect against these new strains.

We will be having our cats vaccinated with it in a month’s time once their immune systems are back up to full strength.

Please speak to your vet about these new cat vaccinations. I cannot give you its name as it may be called something different where you live.

After watching my cats go through what they have and the fact that I could have lost both of them, I strongly urge you to have your cats vaccinated.

Top of this Calicivirus Page