My cat bathing story by Oliver Smith . My cat, Baby, is a long hair (Burmese). She's incredibly timid. She gets allergies around July/August. She was scratching and itching so much I wasn't sure what to do with her, and suspecting fleas, I decided a bath was needed.

She'd been a stray, I hadn't declawed her. She's not even particularly fond of being picked up, so I braced for the worst and decided to take my brother-in-law's advice on bathing a cat.

I ran the bath to what would be just about an inch above her belly line, and I got a feel for the cat's temperature under the fur and got the water about a degree or two warmer.

I went thru my usual calming words as I took her into the bathroom, I moved slowly while carrying her, kept repeating the words "Baby's OK"

As expected, she fought and struggled to avoid going in but a few moments after discovering it was pleasantly warm, she sat down.

She kept an eye on her exits, but she didn't resist at all as I shampooed and washed her. 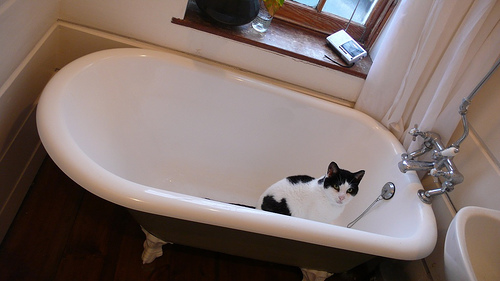 During the cat bathing, I kept saying "Baby bath" and "Baby's OK" (I've worked hard to establish "Baby's OK" as a soothe).

She seemed less appreciative of the towelling process and was eager to be off cleaning herself afterwards and finding a warm place to dry out.

But she seemed to appreciate that it helped with the itches. Prior to the first cat bathing episode, she'd completely ignored the bathroom.

During the winter, I gave her another bath as her shedding came to an end, and I went without a scratch putting her into the water this time.

As allergy time came back, I noticed a growing fascination with the bathroom on her part, but thought nothing of it. Then the itching started and was abated by another cat bathing time (followed by a vet trip to medicate).

The third year's July came around, and I started finding Baby not in her usual haunts when I returned home, but sitting in front of the bathroom door. Sure enough, the itching started, and now Baby broke her general silence and started expressing meows at the door to have it opened, but not wanting to go in once it was opened. After about a week she plucked up the courage to go thru the door but darted out when I followed her in.

The next time she did this, though, you could clearly see her fighting a flight instinct as I followed her in. And to my complete surprise, she stood there in that half-turn posture they use towards the place they know you keep the food or the fridge or the favorite toy.

I've had Baby 6 years now. Generally "Baby Bath" will elicit tail wagging and put her in a grumpy mood. But around allergy season, she seems to give me a considering look.

Over the last couple of years I've gotten into the habit of occasionally taking her in there and showing her the tub, soothing her, and then carrying on visiting other sites of interest in the house - to put her at her ease more when cat bathing time does come. Occasionally I'll put her into the tub, without water. She'll stand there to evaluate my intentions and then hop out.

This years allergy season has just gone by.

A few weeks ago she'd just started itching and was showing bathroom interest again. I came home one day and she led me straight to the bathroom door and began pawing at it. I opened the door, picked up the now nervous cat, walked in, who tensed up some, squirmed a bit in my arms.

I put her in the tub, and instead of looking for the exits, she gave me the "can I have pose?" and stayed there while I went and fetched towels.

She really dislikes the noise of the tub filling, so I put her outside the bathroom and ran the taps. She scurried off at the noise, but I waited a couple of minutes after it finished and then opened the door. She'd scuttled off to the balcony door at the far end of the apartment, but at the sound of the door opening she gingerly came over towards me. "Baby bath" I said, and the tail lifted in greeting. She didn't come further towards me but she didn't make show any resistance to being picked up.

We went into the bathroom, I forgot to close the door. After I put her into the tub, I realized I'd forgotten the shampoo. Ah well, carpet's gonna get wet. I ducked out the open door and picked up the bottle, yet again forgetting to close the door.

So imagine my surprise to return and find the cat standing in the tub, tail wagging impatiently :) Cat bathing can be fun sometimes.

Top of this Cat Bathing Page