Cat chasing tail question. This seems to be a very common problem for many cat owners as many have also commented on this post. Although I don't think there is one definitive answer to this problem, you may find the reason for your own cat's chasing tail problem in their comments and suggestion.

My 7 year old female orange cat has recently started to chase her tail. At first we thaought this we cute. Then she started to hiss at her tail and then started growling at herself. She always looks hehind her as if something is following her (An invisible friend or foe, we thought).

Now the behaviour seems to be escalating and she is now sounding like she's in the middle of a cat fight. Her tail twitches and the furs stands up when she does this. This wierd, worrisome behaviour does NOT continue all the time. At other times - sjhe's perfefctly sweet and loving as always.

Please help, it seems to be getting worse. Have you ever heard of this?
Thank you so much, Heather

Answer
i will be honest with you and say i haven't come across this before. I would have said that perhaps their was some sort of irritant on her tail but it the vet can't find anything then it may be a neurological thing. All i can say is that as long as you know she is not suffering and is eating etc well then i wouldn't worry too much.
Perhaps other visitors have come across this before and can give some insight into this issue. 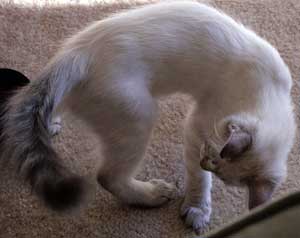 Comments From Visitors For This Cat Chasing Tail Question

Not Behavioral but Medical by: Anonymous

My sisters cat attacked his tail and chewed it til it bled, frequently. It was an unpredictable behavior. Just happened whenever. It got progressively worse over time. Kitty meds did NOT help and actually only led to more anxiety.

Eventually it was decided that tail amputation might provide the relief he needed. This seemed to work for a while. He would still occasionally get up startled and staring at his backside. Some time later, about a year after the amputation of his tail, she came home to a collapsing cat in great pain. After rushing him to the hospital, he was diagnosed with saddle thrombus.

A blood clot that lodge in his spine in the hip area causing extreme pain. He was diagnosed with non-synching heart ventricles that led to poor circulation and blood clots. It was suggested that his tail probably had a 'pins and needles' feeling from poor circulation and possible blood clot which caused him to attack his tail in distress. You'd have never known looking at him. He was beautiful with shiny fur and seemingly fit and happy.

My cat has been doing this for a while now!! He lays his ears back and growls and hisses and sounds like a cat fight! He does this until it bleeds. We have recently wrapped the part of the tail with seems to be helping (if it's tight) if the bandage is lose, he attacks the bandage and it falls off. The vet told is he had a fracture in his tail which may cause a pain in the tail that causes him to attack. He recommended medicines for the tail and if it did not work, they may have to cut some of the tail off. (The fracture caused a kink in the tail)

It's cat hyperesthesia. Not all vets know what it is or how to deal with it. Call around until you find a vet familiar with the condition. There is medication to help calm your cat and return him to normal. 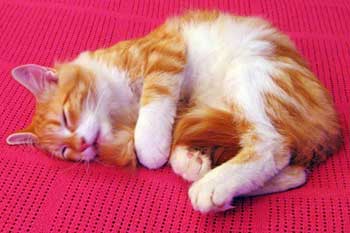 Our cat "stash" bites, hisses, and chases his tail until it bleeds. And then chases it some more. In his case it is felt that it is a neurological problem. When he was just a kitten a 40 pound box fell on his head. My guess is he weighed maybe 2 pounds at the time. It basic killed him. We spent Wayyyy too much money saving him. ($1700. +)Anyway we should have been warned about possible, NO probable brain damage. We were not.All he does now is growl & his. I hope his life feels better to him than it does to us. We are still wondering if we did the right thing for the cat!For our own heads we did the right thing at the time. We love our friends.

Cat fighting with tail by: knittercritter

My 2 year old spayed tortoiseshell has started this behavior about 3 weeks ago. It is exactly as everyone has described: she growls, hisses and fights with her tail. She also grooms excessively and has numerous bald patches.

We also use Advantage on all our animals and have never had a problem with it before but maybe some animals have a reaction to it. Someone else noted it but it seems to be a commonality that many of these cats were abandoned and bottle fed, as was ours. I wonder if they missed out on a necessary nutrient from mother's milk and it is now a vitamin deficiency that is causing her behavior.

Our vet also suggested it might be due to a flea allergy and to provide benadryl. This seemed to provide some relief but I am having a devil of a time getting her to take it because she has become very aggressive when she is in these moods. I'm trying to sneak it in in her water or wet food but suspect it is rather bitter so am not having much success in getting it down her, although I would gladly put up with the scratches if I was successful in force feeding her. But I'm not. I also feel so bad for her. She is such a loving gentle baby when these moods aren't on her and I will continue to watch this forum to see if there are any other ideas. 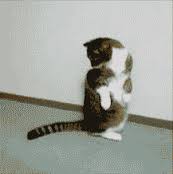 IT'S WORKING SO FAR by: MY BOY

My cat was doing the same thing like most of the comments, chasing his tail, and like a cat fight with himself I took him to the vet he gave some medication for him, at first it looked he was doing good about 2 days later he was back to his old ways.. SO I decided give him a flea and tick shampoo at first that day after his bath back to his old ways... so the next day nothing like a normal cat so far working 1 week and counting without chasing his tail and cat fight with himself, Hopefully it will work with you also....
GOOD LUCK!!!

I have been reading these comments and it is sad that many have not received a diagnosis for the tail chasing condition. It seems that many of the cats have the neurological condition, Feline Hyperesthesia Syndrome. Our kitty is 10 yrs old and when he was about a year old, he started chasing his tail in a cute way. But then it became more agressive and his was biting his tail and hind legs. He wouldn't do it everyday at first but then it got much worse. Whenever we took him to the vet they said he seemed fine.

We video-taped him doing it and took the tape to the vet. That's when he got the diagnosis of Feline Hyperesthesia Syndrome. As many comments have said, stress does seem to aggravate the condition. "Out of sight, out of mind" works well since if you cover the tail with a blanket he will stop chasing and attacking his tail. Our kitty has been taking Amitriptyline for years as a transdermal ear gel and it keeps the condition under control. He still has episodes a few times a week but they are shorter and it is easier to ditract him and get him to stop. I hope this info helps some of you dealing with this frustrating condition.

My cat is three and since she was a kitten she has always chased her tail. It's only in the last few months that she had started to chase her tail to the point of screaming and making herself bleed.

She was like a little demon and would do it almost constantly while awake. It was terrifying! The only thing that would help would be if I put a blanket on top of her body or put one of those cones on her head. Like if her tail was out of sight it was out of mind.

After spending SOOO much money on about a million tests at the vet it was discovered nothing was wrong and it was determined that this was a neurological problem and I now have to give her a medication called clomipramine everyday which is basically an antidepressant.

I have my old cat back now. She is still active and much happier now. My wallet is left lighter every month buying it, but after getting over the weird stigma I had about drugging my cat it has made her so much happier.

She was an abandoned shelter kitten and although I'm still sad I cant have a normal cat, I love my little demented monster :)

My Max.. by: Anonymous

Also has been attacking his tail for a couple of years now and the vet did say that it's probably a neurological problem and I do agree, but why does it start happening as they get older? Max was and outside cat for a short time until he was attacked by an animal outside, after that I kept him in. He's such a sweet cat and it drives me crazy to see him acting this way, he is definitely stressed. I had given him a flea and worm treatment from the vet a few years in a row. It was liquid form that you put on their necks and I'm seriously wondering whether that has had a permanent effect on him.