Cat Hunting
Why Do Our Cat's Still Hunt?

Cat Hunting skills have never really been lost throughout the whole process of their domestication. Your kitty will still feel the need to go out and hunt birds, mice, frogs, in fact anything that is small enough to catch.

This is a puzzle to most people as they can’t understand why cats continue to hunt, especially as we provide plentiful food and water for them.

Funnily enough it was the hunting skills that first endeared the feline population to humans in the first place.

Thousands of years ago when humans began to grow their own crops, mice and rats began to become a problem in the storing of these foodstuffs.

The cat’s ability to kill rodents with ease and their apparent acceptance of humans meant that they were welcomed into people’s homes.

So cat hunting was admired, in fact cats which were prolific hunters became very valuable animals and their off spring could be bought and sold for large sums of money.

Is There Anything We Can Do To Stop Our Cat Hunting? 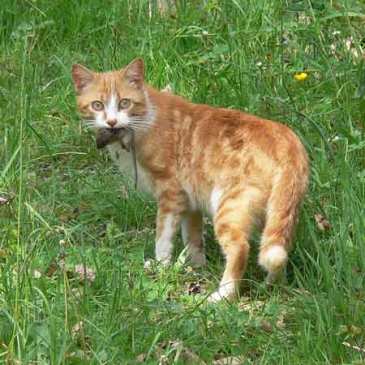 Unfortunately hunting instincts will always remain with our cats, even though they may no longer need to hunt for food.

HOWEVER there a few things we can do to try and reduce the occurances.

We can do somethings which will reduce their efficiency at killing and reduce their cat hunting opportunities.

You can also try to reduce the instinct outside by playing games with your cat EVERY DAY that mimics hunting. 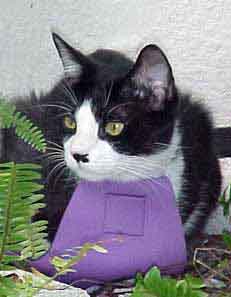 The Cat – The Perfect Carnivore

Cats are sometimes described as the perfect carnivore because their whole being is designed for hunting and eating animal flesh, from their claws and teeth to their digestive system.

In fact they are one of the few animals that need to have some nutrients that traditionally could only be found in meat (although this can now be synthetically reproduced in some cat food).

From a very early age kittens are taught by their mothers that mice and birds are good to eat.

She will bring them to her kittens alive and dead to play with and to eat. Eventually they will watch her stalk and catch prey and will learn the techniques themselves.

There is no way for us to prevent this, even if kittens lose their mother they still have a natural instinct to chase and catch fast moving small items. 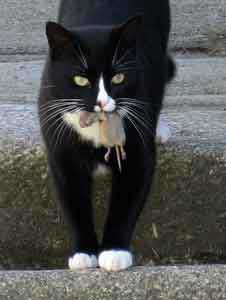 The actual cat hunting instinct to kill does not remain for most domesticated cats as their owners provide their food for them. However it seems that cat hunting is more than just a way to feed themselves, it is also a sense of fun for them.

Many happy hours are spent hiding and stalking prey and then pouncing and chasing the prey around. In fact I'm sure a lot of cats do not want to intentionally kill the prey.

One of our cats always looks so upset and disappointed when their furry plaything stops running away.

I simply find these perfectly formed dead mice in the garden or under my table, hardly a chew mark in sight.

I am often asked questions about certain strange cat behaviour associated with cat hunting. Many people just can’t understand what on earth their pet is doing when they catch sight of their prey.

Here are the two most commonly asked questions and answers:

Here is a demonstration of this chatter (not chirruping).

Head swaying - Cats will often sway their head from side to side very quickly just before they pounce on their prey. This is important so that when they do pounce that they do not miss their target.

Cats have binocular vision which when they shake their head quickly allows them to accurately judge just how far away their prey is and so gives them a better chance at hitting their target.

Why Do Cats Play With Their Prey? 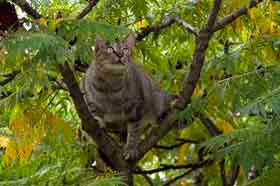 There are several possible reasons why you might see your feline pet teasing and tossing their prey around.

After all if it wanted to it could just use it’s specialised bite to instantly kill the prey, but where’s the fun in that? They are not attacking the prey for food, so the instinct for the chase is the stronger of its emotions.

Secondly, you may be watching a female trying to catch an animal and keep it alive to present to her young family for training purposes as mentioned above.

Lastly it may be that the animal is nervous of its prey and does not wish to get hurt. This is especially true with rats, as they can give a very nasty bite. In these cases the cat is probably trying to subdue the rat until it is able to give the killing bite, which has to be administered to the nape of the neck to be sure of killing the prey outright.

Why Does My Cat Give Me Dead Animals? 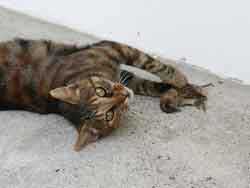 Uhgggggggg, this is the normal human reaction at discovering a dead mouse or bird left for them on their doorsteps or brought to them by their sweet kitty.

Actually our reaction should be "Thank you very much" and to give plenty of strokes. Why? Well in our cats eyes we are part of their family and if they feel that a member of their family is not able to catch it’s own prey then they will try to provide some.

This is why neutered female cats are often the main culprits of this behaviour, as they do not have kittens of their own and their instincts dictate to them that they need to bring us some food. It’s very sweet really; it’s just a shame that we do not appreciate a good gooey mouse as much as our feline friends do.

Top of this Cat Hunting Page