The cat mating process may seem a little odd and even brutal to our human eyes.

I have known some owners to think that a male cat is trying to kill a female cat when in fact they are mating. 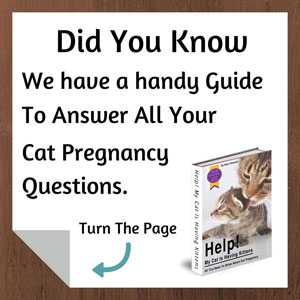 This can be due to the terrible noises they make and the way they hold the female during the mating process. I was going to put a video on the page but I just found it too much.

This page will take you through a normal mating so that you will learn what normal behavior in these circumstances is and to waylay any concerns or worries you may have at the time. 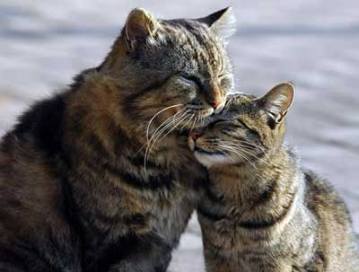 Female cats will normally have their first period of being in heat at around six to eight months of age but for some cats this may happen even earlier at around 3 and half months.

For the Male they normally begin to mature at around ten to twelve months of age but again this happen much earlier at around six months for some male cats.

It is therefore wise to note that if you do not wish your cat to have kittens or for your male to father any kittens that it is best to have them spayed / neutered at around 4 to 6 months of age. 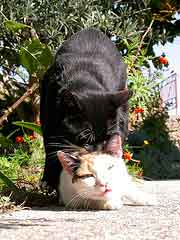 Both male and female cats will call when they are ready to mate; this can be loud and is known as caterwauling. It is an unusual meow and can sound like they are in distressed or in pain.

When a male finds a female he will continue to call to her and begin to circle her. At this point the female cat will either accept him or refuse him by hissing at him and flattening her ears against her head.

If the female is not ready to mate the male may still lay close by to her in the hope that she will change her mind, this can take some time.

When the female cat is ready to mate she will begin to display certain behavior to show her readiness such as:

At this stage the male will grab the female on the back of the neck and he will mount her. Mating can be over very quickly and the female cat will often turn and attack the male afterwards.

The first mating induces ovulation in the female cat and so subsequent matings will happen to ensure that she has been fertilized. During her being in heat which can last several days after being fertilized she may mate with other male cats too and this is why litters can contain kittens with different fathers and so look very different from each other.

You may find these pages interesting too.

Top of this cat mating page 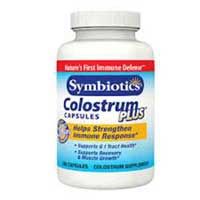