Find great cat names beginning with A. These names have been submitted by site visitors.

I found her as a very small kitten at my childrens' school about 4 months after my cat died he was almost 12. All kinds of people were just walking right by her, dropping their children off at school. I know everyone who walked by heard her, she was meowing so pitifully, my son saw her and asked me to do something, so i brought her home for him. I told him he could have her when he came home from scool, and her named her Abby after the NCIS character he has a crush on, he was only 5 and a year and a half later, they are still the best buddies.

I named her after my favorite rock band, Aerosmith!

Aiko is Japanese for "little loved one".

Aiko was abandoned at 3 days old, and when I found her, it seemed like the perfect name for the little handful of fluff I found and loved :)

I named my kitten this name because my friend told me Aislinn was a common name in Canada. Since I will attend college in Canada next year, it seemed like a perfect fit! The reason I gave her the second name Clare is that my best friend was named that and she died of cancer last year.

'Akira' in Japanese means sparkle or bright. Which I felt my little male kitten was ideal for. He was a white male persian, there was a sparkle in him, he used to never sit still, always upto something, really amusing...first I wanted to name him sparkle, but then I found out this really sweet sounding name, which also means the same.. yeah of course, he is got that sparkle of mischief in his eyes too !!

by High Priestess of the Cat Worship Cult (Phoenix)

He was a noble cat deserving of a proper name and he had a kink at the end of his tail shaped like a 'Z' for Zander.

Alfie - One Of My Favourite Cat Names

After Alfie on Eastenders - a nice character.

This is such a cute name i think. I can just imagine you calling this out to get your cat to come home.

A perfect name for a cat i think, modern, cute, a little crafty but full of fun. All in all one of my favorite cat names I think.

by Laurie (Kitchener, On. Canada)

Because she is a super genius and a loner so she needed a very human name and Amy fits her to a tee!

Interesting reason for giving her a human name, so that she fits in and is not lonely.

i have a friend who will only give her cats human names and thinks that anything else is silly. I have never known anyone to be so adamant about this before. Any way she would approve of your choice of name for your cat I think.

when we got her she seemed like she was glowing, as if she were an angel. 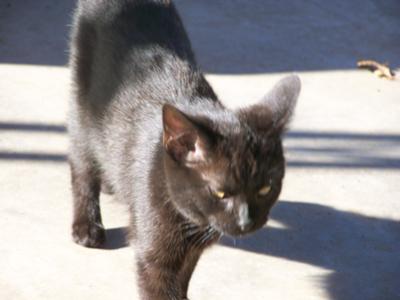 My cats name is called Anna Bell and I named her this because It's just a pretty name and suits my pretty cat!!! :)

by Taylor (Portland, Oregon, US)

I chose the name Apolo for my kitten because I love ice skating and Apolo Anton Ohno. I rescued him from a family who had four other kittens in the litter and were going to abandon them. I took them to a very nice animal shelter and fell in love with him. Despite his rowdy behavior, he is very loving and sweet. He loves giving little "kisses" to his feline companion. I almost was going to name him after a friend but when I was watching Apolo Ohno in an ice skating tournament, he started chasing him on the TV so I stuck with it.

It's funny how sometimes our cats seem to choose their own names. We named Byron our cat after the poet mainly because Lord Byron was known as a mean and moody character who was described as dangerous to know and our Byron looked dark and mysterious too. However I wouldn't say our Byron is dangerous to know, he is sweet and loves to give everyone licks. Shelley his brother was simply named because Shelley the poet was Lord Byron's friend in real life and so we thought the two names worked well together.

I must admit I don't knot h ice skater you are talking about but it's a good name.

When I brought her home, the movie, Raising Arizona was playing on tv. I liked the unique name.

He is a cat who is big and orangey-red like a big scotsman. I would like to dress him in a kilt and send photos

only if your cat is happy to dress up of course.

Top of this cat names A Page