Cat Names beginning with the letter c. Every thing from the girly Cleo to the butch male name Claude. 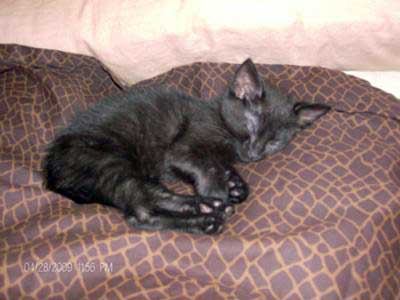 Calypso means "she who hides" and when we adopted our kitten, that is what she did! Also, Caly is a catchy nickname!

The name Cameron means "crooked nose". Our Cameron was born with funny coloring on her nose that made it looked crooked.

Like it and original too. I don't think I have ever met a Cat called Camo before.

Campbell is a Male Tabby and some of the same personality traits that i know of with people named Campbell, i could see in our kitten. He is affectionate, playful, smart and toned from his ample activity level. He is very loyal and aloof.

When we got her, she would mess around with the candy bag and spill the whole bag all over the floor. No matter where we put it, she would always find a way to get to it. She would also stuff one candy (with the wrapper) in her mouth and then lose it somewhere in a few minutes. The name, we thought, suited her perfectly as she was sweet as candy.

The first name i gave her was cupcake but she didn't look like one she is a mixed tabby i started thinking caramel or chocolate then it hit me CAPPUCHINO because she had all the colors of coffee and white just like whipped cream and caramel that looked like well caramel so a cappuchino is all of that so that was how i decided her name :].

His name in the shelter was Captain but I liked calling him Cappy.

I love the name Captain for a cat. It works so well as cats are always in charge.

He looks like a big fluffy bobcat but is sweet as can be.  We joke that he is the Captain of a tuna boat because he loves to drink the tuna juice from the can after I make tuna salad. 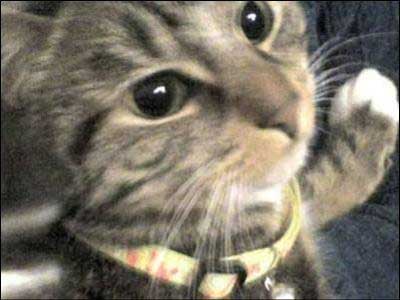 because he's white and deaf like casper the ghost! 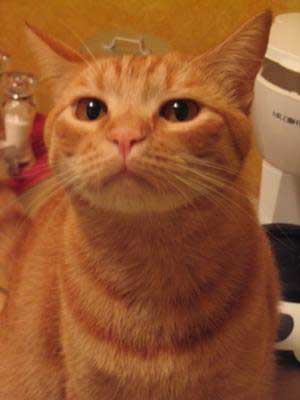 He's an orange tabby. He looks like Chester Cheetah from the Cheetoez (cheesy snacks) ads.

It was this cat names when we adopted him from another home.

she likes the way it sounded compared to Asuka she would look but not come but Cici sounds like kitty kitty so we called her that.

She has white markings around her nose that make it look like clover leaves. Very cute since each marking is exactly the same. 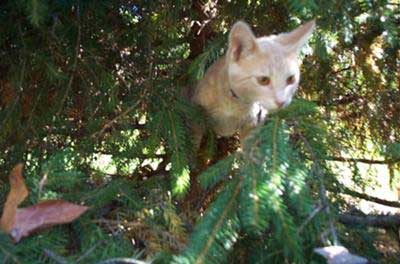 he was born at our house and he always climbed up us and crawled around really cutely and i think this name is cute.

well its c fer cat so cfer :)  he was a male persian blue-shorthaired ...

Not my cat but a neighbors cats' is best friends with my cat (Leo) and at first I didn't know why he was named that but then after watching him for a while I noticed he was a very risky kitty he was like a little stunt-cat! He was always making risky jumps and climbs and then I understood why he was named Chance. He was a risky, chancey kitty!

I liked the name charlie although he looks like a toasted marshmallow. We couldn't decide on one name.

Because she is black and white and when she was a kitten had 4 black square markings on a white body! looked just like a checker board!!

cheeko is an orange tabby, and he is the cutest cat I have ever adopted!! me and my sister chose that name because when we close the door  to keep him away from the dinig room ( really fancey!)but some how escapes! weird huh? 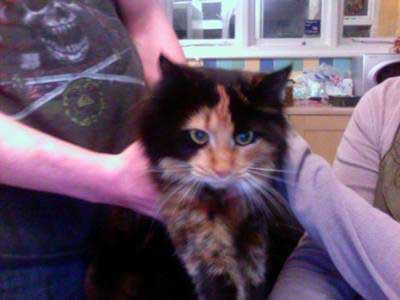 our cat got given the unusual name of cheese because on the day she was going to be collected tom (her main owner) was asked where he was going and he replied 'to the moon to get some cheese'... and it just stuck! She suits it alot and we are expecting her kittens in a week or so, and we have already decided to name each one after a variety of cheese. 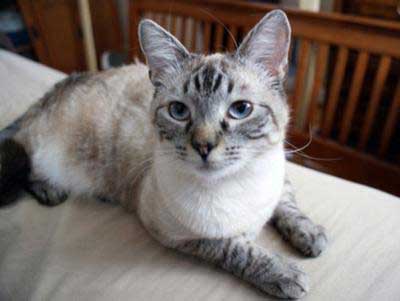 We brought Cherub home to foster when he was about 11 weeks old.  It took 2 days to give him a name.  He is a siamese mix.  My favorite band is Smashing Pumpkins, and they have an Album called "Siamese Dream" and the first song on the Album is "Cherub Rock".  Some of the lyrics are "But beware, all those angels with their wings glued on" and that describes Cherub.  He acts very angelic, but also has a mischievious side.  Cherub is turning 3 years old in the fall of 2010!

Funnily enough I have never met a cat called Cheshire before even though it is a famous name from Alice In wonderland.

This name was from a symphonic piece I played years ago in my high school concert band...can't remember the composer though. 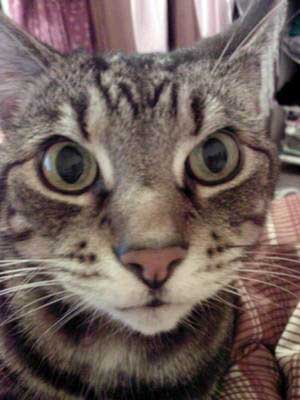 I couldnt think of a different, quirky,or cool rock and roll name for the little bundle of fur I had just brought home....then I searched through some albums in my collection and came across my Deftones cd's, and Chino was named.....:)

Well Chivers is mainly a ginger Tom though he does have some white, so we first though of calling him Marmalade but my husband refused to stand in our garden calling out Marmalade.  Then it went on to makes of Marmalade i.e. Hartleys or Robinsons but we finally decided we liked Chivers and it does seem to suit him. 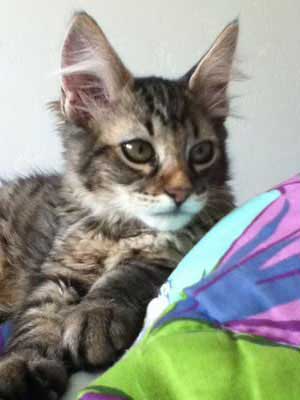 ChloeBell is a female domestic long hair tabby. She is my daughters cat. we all love her so much shes just not our pet. Shes part of our family and shes very spoiled.My daughter has never been a big cat lover but she really wanted chloebell. so we kept her. my daughter has always liked the name chloe so that's what she named her. but one day my daughter and I were playing around with chloe and making up songs with her name in it. I just kinda threw the name bell in her name and it just kinda stuck their. we all started calling her chloebell and still do. this cat loves her name though you can tell. chloebell is a one of a kind cat. 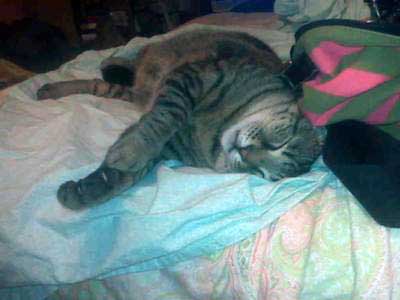 I named my cat Chopper because of his playfully aggressive nature as a kitten and the fact that my husband owned a chopper motorcycle.  Chopper is 7 years old now, and the name still fits him perfectly.

Great name I love it. I have never come across a chopper before (I mean a cat I've seen the bike :)

Thank you for submitting your cats name and picture. Hope to see you soon 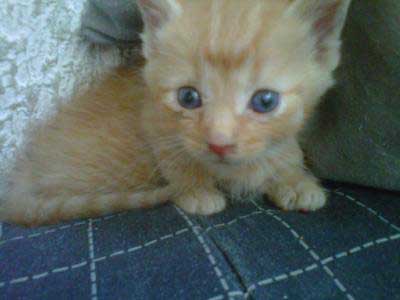 He's an orange Maine Coon, and I wanted to give him a more unique name than Tiger! Haha, and he responded to it immediately.

Well Chowder is certainly a unique name for a little kitty. He looks like he will grow into a right little character. I had a maine coon cat myself years ago. he was the most loveliest cat, so gentle and sweet. I bet you have many happy years with your cat. 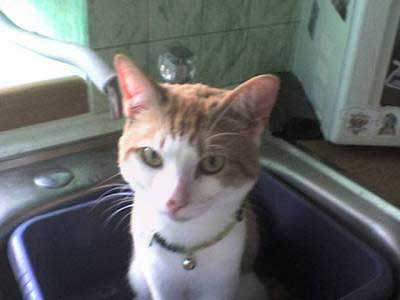 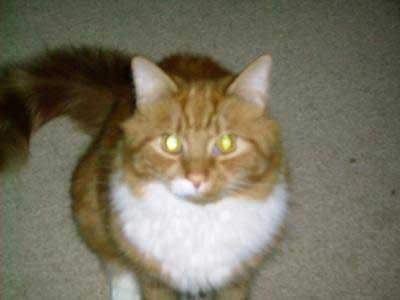 I found him under a storage shed about 10:00p on a dark and rainy night. He was 3 weeks old, obviously lost or abandoned. This occurred as I was leaving a Jewish learning center, so I had to name him something to reflect his "heritage"!

From the git-go and to this day, I don't know if he wears the name or the name wears him. Nonetheless, he is very nervy, gutsy, spiteful and stubborn.

The kinda cat that will dare you to scold him or chase him away from beating up the other cats or for jumping on the dining table and scattering the napkins and silverware!! Or from knocking things off your dresser every time you are just about to fall asleep!

He will wait until you need to use the bathroom. He will position himself on the sink close enough to tap your shoulder or smack you in the face as you sit on the throne. This is because he wants you to turn on the sink water. He likes to drink running water from the faucet and insists on it. He will keep smacking you until you turn it on. I've never seen him drink from a bowl in my presence. He even defies the water pistol! He acts like he enjoys it. He will sit there, get soaked and not move until you get up and chase him. I could go on and on with examples. But I love him dearly.

My kitten Claude is three months old. and he was given to me by my sister in law. we have had him a little over 2 weeks know, he is so precious, and affectionate he loves to sleep on our tummy, and practically our heads. I think he is developing a laid back, and easygoing personality. We also have a dog that barks at Claude every time he sees him downstairs and will try to chase him off to go back upstairs. by know Claude is getting used to that silly barking and just chillin on the furniture watching the dog bark away. speaking of chillin Claude is sleeping on the couch right know and his new buddy is snoozing on the floor next to him. I think they both might of called it a truce. I came up with the name Claude because I thought it was both nerdy, and cute for a male cat or dog. and because my kitty Claude does look like a Claude. 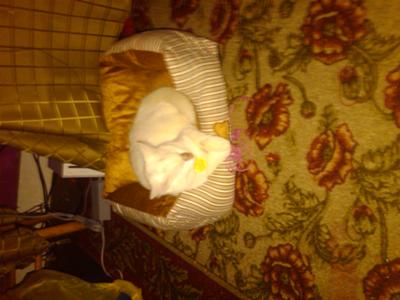 Because he is all white and soft. When I first laid eyes on him at the shelter I knew he would be my cat. His name really fits him. When he balled up in the fetal position he looks like a large cotton ball. He's extremely soft. I love him.