Looking for cat names beginning with the letter E? Great, all of these names have been sent in by other cat owners and all belong to a cat somewhere. Find out why a name suited their cats.

We rehomed our cat during the easter holidays, she had just had a litter of kittens and the Easter story of being reborn and her just having kittens seemed to work well for her. She has a lovely mottled coloured fur coat.

Comment from Kate
What a lovely reason for giving your cat her name. Its such a pretty name too. I nearly rehomed a cat called Easter who was a calico cat at a rescue center. Someone got to he first though :)

Well, my previous cat Mr.Flopsy (who had three legs and ironically looked like Adolf Hitler) had passed on after living for 15 years in the country. I had been younger then and was devestated. My parents dd t want to get a new cat but we gained a serious mouse problem..... Not long after a friend's cat had kittens and so my family decided to get a new kitten. We had a method of picking one out. The one who ran away from us, would be our cat. Reason being- we lived in the far out country of Oklahoma so we knew this kitten had a heightened instinct to run from predators and such. The two of us bonded rapidly upon bringing him home. I played with him for hours. For about a day of going anonymous, my dad and I brainstormed on names. So my dad came up with Eat'N Hunt (Ethan Hunt) from Mission ImPAWSibble. Family agreed and we gave him a nickname: Hunter. It just so happens that he shares a name with my childhood friend, Hunter Bradswell. For some odd reason i had remembered his father or mummy calling him when he was in trouble, Hunter Dean. So thus, when Hunter is in trouble I often call him Hunter Dean. However, when I'm out working in my garden (he's an outdoor cat) I refer to him as Hunter Bunter. Not sure why! He bounds around are yard a lot. I'm seventeen now and he's around 6. We still pounce around and play games like hide and go seek and tag and such. We race and have lots of fun. I'm a little concerned for his health though, but I'll ask sometime later. :) so there you have it, my cat Hunter.

(unfortunately I'm on my phone so I won't be able to provide a picture of him! He's a very lovely cat. I'm not sure what his color is officially. He has a tasty chocolate coat with swirly cream markings over it -his neck almost has a sword-like pattern. He has light and expressive earthy green eyes, a petite pink nose with a little peppered blaze. His belly looks like faded leopard print and his legs are striped like a tabby. He also has a cute little white bowtie that just plas more on the irony of his name)

she was all black and beautiful 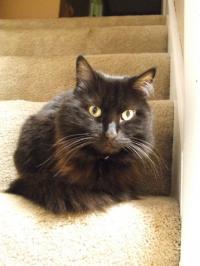 I named her Echo because she would always meow back at you when you talked to her. She was very talkative and sweet. She recently passed away and we will miss her greatly. 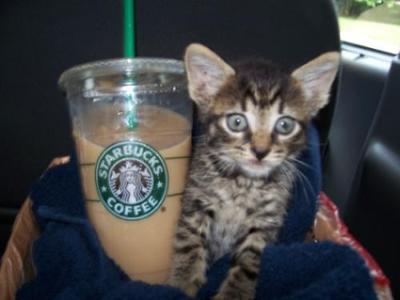 by Wendy and Pauly (New York)

This is "Eggy". He was originally given to us by some friends who developed allergies to cats. When we got him, they thought he was female, so his name was "Zoe", but when we found out he was a lil boy, we changed his name to Eggy because we thought he looked like a little EGG. Anyway, his name has now been expanded to "Eggmund P. Longbody" because he has GROWN! HE no longer looks like a little egg, he's a pretty big boy now, and I will post a picture of him now, as well. :) 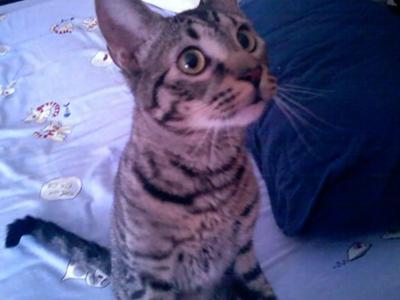 by Wendy and Pauly
(New York) 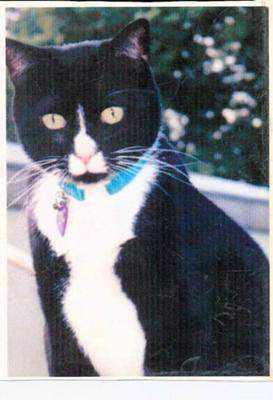 When I got him i had thought about play boy because of his markings and then my boyfriend did something really crazy and i said way to go there Einstein and that is how he got his name. and yes he really is smart

We called our kitten Eli, after Eli Manning of the New York Giants. We named him Eli because my boyfriend is a really big Giants fan. Also because we said it, and Eli seemed to like it, so we knew that was it. 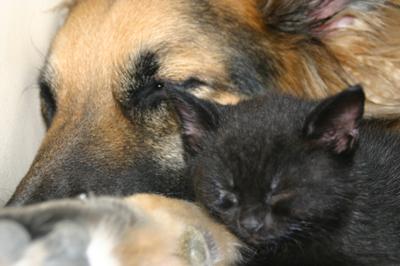 It was a choice between Elmo or Mika. We finally settled on Elmo because the seaseme street charactor is so cute and our new little kitten was really cute to . He's a year old now and his name still suits him. 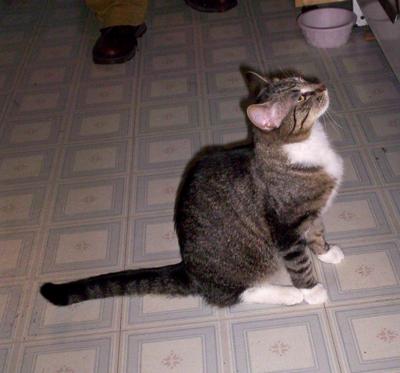 We just loved Gregory Maguire's novel and musical "Wicked," in which the Wicked Witch of the West's name is "Elphaba," in tribute to L. Frank Baum. Elphie is the heroine of the novel. When we adopted Elphaba, we just couldn't think of a good name for her. As a joke, we suggested Elphaba, and it stuck!

My dad gave him this name, and to this day if you ask him why he says: Because he looked at me and said "don't step on my blue suede shoes." and it really fits him!

My wife came up with this GERMAN name for the cat and means "Little One" in German as in Henrietta = Little Henry" However, I decided to see what it meant here in the USA Etta means "Ruler of the House" which is much more appropriate for this ball of fur.

Comment from Kate
Perfect, Ruler of th house, yep sounds like every cat i have ever known. What a great cat name to find.