Fatboy loved to eat chicken wing bones out of the garbage!!!!

comment by kate
shame you didn't have a picture of fatboy, i would have liked to see him in all his bigness :)

Not only is this name based of the 'wonderful' cat himself, this name is also a nice name if you like to give your cats old names. It is also short, and it has many cute nicknames. Felixe`, Flicker, Flick, Flix, Flicky... So you will always have a different variation.

Comment by Kate
I often wondered what Fifi was short for and i wouldn't have guessed that it was Phoebe. I wonder if you named her after the character off of friends. Or Bob Geldofs daughter Fifi Trixibell, Im guessing not :) Anyway a great cat names choice.

she was born in the plant department at a local discount store. so i thought a name of a plant would do best.

when we first got her six months ago she could not be still. constantly on the move,getting into everything,sooo the name just fit. she still is Fiesty my little girl cat.

Comment
It's funny but i have only known girl cats to be called fiesty, go girl.

Because he has a very loving personality( like the cat in Pinnochio).He also looks very similar to him.

My room mate and I wanted to name her a name neither of us have ever heard before. We came up with Fleaco short for Flea Company. Definitely different, and now that shes 16 I still have never heard of a cat with her name.

Comment
Great name and your right i have never heard of that name before.

He is a fun loving kitten

Comment from Kate
What an unusual name, where on earth did it come from from. It sort of sounds like a mixture of the flood and poodle or perhaps frodo.

A friend of mine had a Maine Coon he named Flounder. When he announced he was getting a divorce he called me to see if I wanted Flounder. I was ecstatic! The first time I met the faithful feline he came and bumped me on my leg. I was told he had never done that to any of his other friends. So our bond was there from day one. When I adopted him he was still Flounder to me - and so he is now and will always be Flounder. 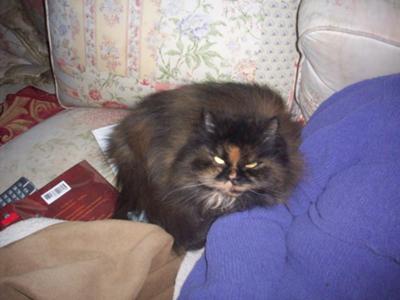 Pretty self explanitory by the picture hahaha...but have no fear, she really does have pupils, they just didn't show up in the picture for what ever reason :)

by Cynthia (Pitt Meadows, BC Canada)

comment by Kate
Oh i love those cats with the big fluffy pants on. I used to have a main coon cat myself and he used to have them.
Great name by the way.

I'm not very good at thinking up good cat names but as my cat was grey and i liked the famous poem I thought I would name him fog.

comment
I don't know the poem i'm afraid all i know is the book called The Fog which wasn't ery nice which i'm sure your cat is.

Do you call him Foggy?

Its certainly a rare cat's name. 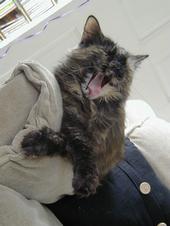 Fran entered my life in 1995; at the time I named her Tabitha. I would call her Tabitha and I would be ignored time and time again. After about a month of being 'dissed' by this sassy calico, I looked at her and said, "you look more like a Fran." She immediately looked up at me, as if to say, "well its about time you got my name right, lady!" And the rest is history. Fran just turned 14 years old on November 19th of this year. (I also have two other 'kids', Abby, a grey tortise shell calico, and Kirby, an all too intelligent part Burmese.)

I think my husband named our cat this because he has loved the show Fred Sanford since he was a child.

Fred the cat, I think it has a certain ring to it :) 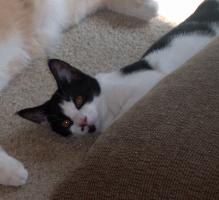 We gave her this name because it represents a freckle, she has two very distinctive freckles on her face 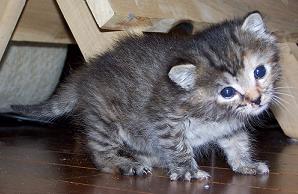 Freon's mom-cat was a feral cat who had kittens under our house. We had no idea this had happened until late one evening when we heard loud, lusty mews coming from the duct work. Investigating outside, we found the mews coming from the flashing connecting the heat pump to the house. About 45 minutes later, we rescued a tiny two week old kitten with a crooked head. We can only assume mom-cat rejected her because of this defect. Happily, the condition corrected itself in time and Freon is four years old, happy, healthy and 13 pounds of attitude.

Well, his name started out as a her name! I thought he was a female so I wanted to call her Freya. Once I realized he was a boy, I checked my God/Goddess book and realized that Freya had a twin brother named Freyr...so there it was. He became Freyr. For this litter I was using God/Goddess names. He was the first feral cat that walked into our house on his own, the first but not the last!

He was a stray wondering in the parkinglot of my aparment complex. I had just seen the movie Lord of the Rings, and thought Frodo would be a cool name for a kitty cat.

My cat Frosty is super cute and FLUFFY! We named him Frosty because he is white with a little bit of brown near the face and on his paws. He is a Himalayan cat and is the most important thing in the world to me. He usually likes to sleep on my bed or just lay there. Frosty rarely gets hyper and he loves almost as much as I love him. And that is a lot! I hope many other people will adopt a Himalayan cat after reading this because cats are becoming more unliked you could say. Now I don't mind dogs (sometimes) but cats are perfect pets too!

Thank you for posting, your cat is lovely.

I don't think that cats are becoming less liked by people in general, i think often what happens is that certain areas tend to be either more doggy or catty if you know what i mean. Where I live it's mostly cat owners, but I know areas where dogs are favoured. It could be due to the environment i.e. too busy for cats.

Himalayan cats are certainly a lovely pet but I would say that any cat no matter what the breed is a worthy pet. I strongly recommend people to get a cat from a rescue shelter rather than a pet shop and so you are more likely to find moggies rather than pure breeds. But of course if you are lucky enough to find a Himalayan looking for a home in a shelter then yes they certainly would make lovely pets. But they do need to be groomed a little more than other cats to stop matting of the fur.

Anyway frosty is simply stunning and looks very happy to me. I'm sure you will both have long and happy lives together.

Comment
Frosty is a beautiful cat. He looks very relaxed. How did you come to find him? Did he pick you or the other way around? Thank you for sharing him with us. 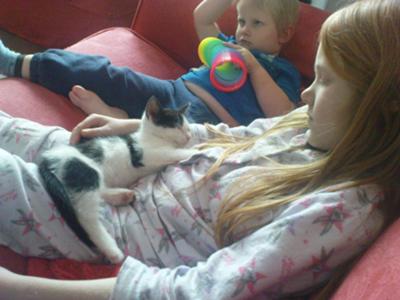 frosty is now one year old and he is a very happy kitty!! we decided to call him frosty as when his black and white fur meet with the other colour it has a frosty outline. Frosty has recently had a flea problem so he had to stay outside for a while. we made him a little house with a cat flap in it and we put his food, water, toys and bed in there. he had to stay in there for at least 3 or 2 months while we found the right treatment. he was fed everyday by me and was also played with. we have now had him treated. we sprayed him and put some cream round his neck and put a flea collar on him and he is now fine. Frosty come from ryde with a litter of 6.my dad was going to get him a brother but he decided the brother was too jumpy and wouldn't settle in. i love my cat as he is handsome, playful and loyal think frosty should be a good name for a white, gray or black and white cat. Or if he/she has light blue or light green eyes.

Great Name for a cat and yes it does suit him/ her. Are you not sure if it is a boy or a girl yet? You should be able to tell by now.

A word of warning, watch out for the flea collar, some cats can react badly to them. So keep an eye out for soreness around the neck or if your cat start to get ill or lethargic. If this happens take the collar off and use the once a month flea spot on treatments instead. I find they work much better any way.

Thank you for telling us about frosty your cat, it looks like he has a very good home and that he will have a great life with you all. 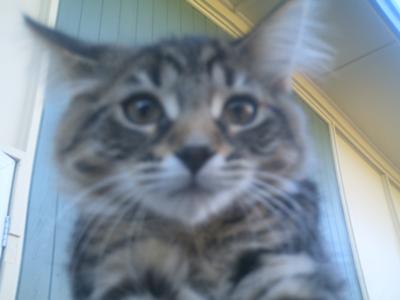 because my kitten has brown cheeks and she looks like she just ate a bowl of fudge!