Find great cat names on this page sent to us by other cat owners. Perhaps you will find your perfect name for your furry pet here. Enjoy

She was so tiny when we first had her and she was very loud and it started off by joking around saying that they could hear her all over the universe including pluto, mars and Galaxy and as we were stuck for a name for her the name stuck and it really does suit her still after 18 years.

We picked her from a women, her cat gave birth to three kittens, so she posted on Kijiji, that she wanted to give away two kittens, and she kept the third one.

When we went and pick her up she already had a name, we found it so original we decided to keep her name GAZELLE.

She runs and jumps high, she tries to climb on high places. Her name goes with her character.

Comment from Kate
So cute and a great name for such an energetic kitty. very neat paws in the picture, she looks so innocent, tee hee.

I named my cat Gemini, because he reminded me of a bright white star or a cluster of stars....he has beautiful light blue marble eyes and white fluffy fur...... so heavenly!!!

Comment from kate
Ah what a lovely name and a lovely reason too. Our cats are heavenly aren't they? Especially when you look into their eyes. You can see the whole of the universe in them. :)

Thank you for sharing your cats name with us 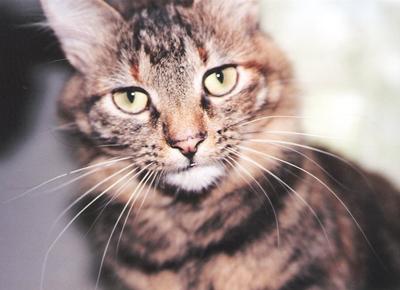 we weren't sure if she was a male or female when she was born, but she came out complaining and quickly learned if you want something, yell. Which is the exact same philosophy of my late father-in-law George. So since she was so much like him, always complaining about something. She's the female version of George. (Even as an adult she is extremely vocal) 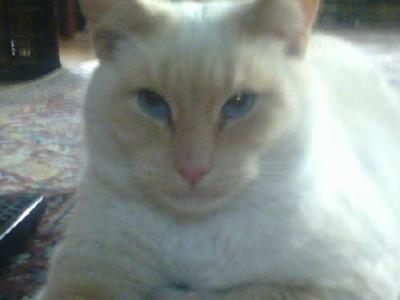 Because he is curious like the monkey Curious George

Have you got a picture of your cat? It's seems quite rare to see all white cats. If you have send it via the contact me email address on this site and I will add it to this page.

because our cat colour is ginger

comment by kate
i used to have a ginger cat and we called her ginny. I also had a ginger cat who we called tigger after the ornage tiger in winnie the pooh.

Its funny but i use to see lots of ginger cats around but over the years they seem to become less and less with black cats taking their place.

i used to love sesame street as a kid.

Because we thout our cat was a girl and we named her Gracie.She stll might be a girl but she has a little "sack".Although shes only 8 months so........ 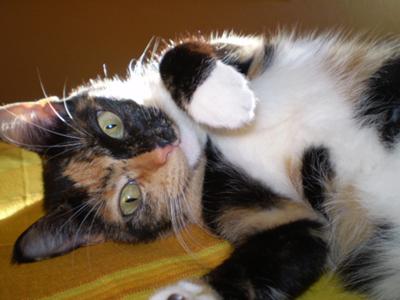 She was such a caring adorable mom when she found me. She just literally walked into my life and 2 days later brought her 2 babies. Since that episode the name Greta just stuck. It was meant to be a temporary name until something else came up as I saw her personality. But she won me over with her fortitude; the name fit her; and she is now the smile on my face...and I can't do without her....

by jacque b (california)

her real name is emily but when she came to us in 1999 she was pregnant. we kept two of her kittens and when they got about a year or so old she would whack them whenever they would get too close to her. we started calling her "grumpy" and it has stuck. she's 12 now and it's a name she's really grown into. we love her all to kitty pieces...

Its posh and funny and it soots snooty female cats.
:D 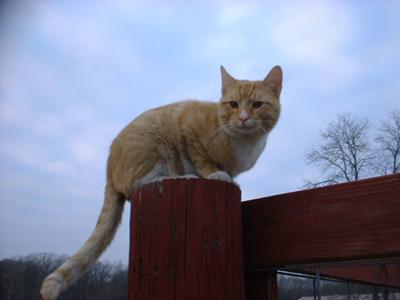 It's from the movie Risky Business where Joel (Tom Cruise) and his friends are in a high-speed chase. Joel's friend in the backseat says, "I've got a trig mid-term tomorrow, and tonight I'm being chased by Guido the pimp."

I've had three orange tabby cats, and all three were Guido's, so I guess my present cat is Guido the Third (Guido III). 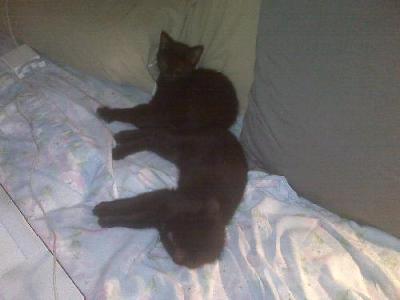 We have two new two mo. old kittens, rescued from separate litters. They're getting along famously...both are black. The little girl is quite outgoing. When listening to a Van Morrison song "Into the Mystic" my daughter and I both realized at the same time "GYPSY" of course!
It seems to suit her curious and outgoing, rambunctious personality to a "t".