Great cat names beginning with J sent in by cat owners from all over the world. 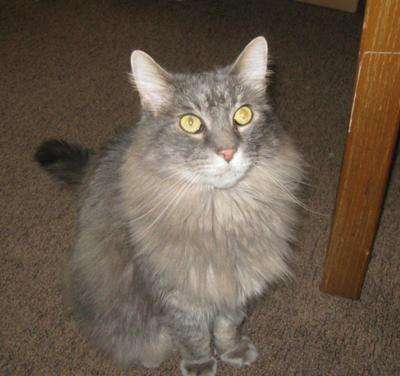 I named my cat JB, because I got him at 4 weeks old. He was so tiny. When my dog would grab one end a rag toy, JB would grab the other end. As they played, JB was being drug around on the kitchen floor. I kept telling the dog, that the kitten was just a baby, and would grow to be bigger than him. This went on for a few days, until I just started calling the kitten JB, for Just a Baby.

Comment from Kate
Love it and so pretty too, I think this is a great name for a white cat. 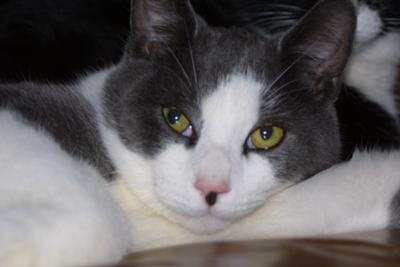 because it means the jasperstone. 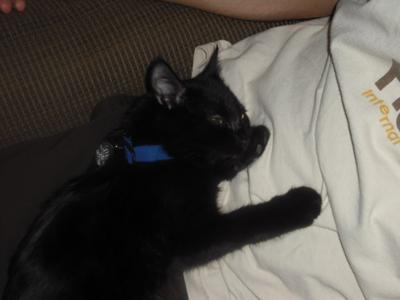 When we went to the humane society to find and search for a cat that had ran away from our home, i went everyday for 2 weeks searching for my black cat and nothing never found him so one trip that i made to the humanen society i decided to just adopt another cat, so i convinced my boyfriend to go down with me to pick a cat out and we had found 2 kittens that were brothers and we were going to adopt them but had to wait for them to get neutred

so as we were walking out my boyfriend stopped suddenly and stared at the glass and it was a small 4 month old black male kitten pawing at the glass at my boyfriend and his face lit up and said were taking this one instead cause it picked him he said. so we came back 2 days later and adopted him, we choose his name because he was soo sketchy about us scared and so loveable im a twilight fan and said jaspers the best name since the character jasper in the movie is a first time veggie and was so sketchy about being around humans cause of the smell of blood so thats why i choose it. i know it sounds cronny but it fit perfect 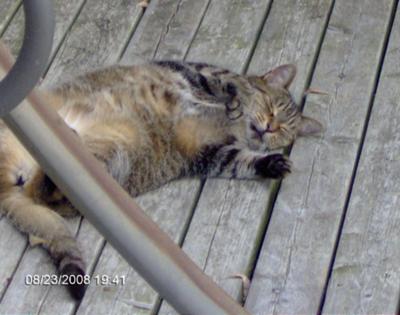 We got her to keep our first cat Casper (passed last year) company, so Casper and Jasper...he got the nicname Capper and we call her Jazz or Jazzie.

my friend had orange hair and her name was jemma, and my cat was ginger so i called her jemma lol.

Comment
Thats a lovely reason for naming your cat, after all your cat will also be one of your best friends in life too.

Because she has the markings of a Holstein cow, but Holstein didn't seem like an appropriate name for a female. Besides, most people don't know the difference between a Holstein and a Jersey, and the name itself is evocative enough.

The cat that had this name was a very unique cat. He had his own funny personality to match his funny looks. He had a very large mis-shaped head and would make you laugh every time he was around. It was for this reason that we named him Jester. For as everybody knows, it was the court Jester that could make everybody laugh. 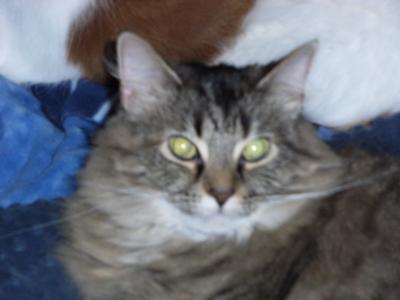 Before Jezzie was born, I found her mother @ my house hours before a huge snow storm. I didn't know if she belonged to anyone or not because I'd seen her around before. She wouldn't leave so I deided to take her in to protect her from the storm. I also decided to keep her If I couldn't find an owner. Well two days later their where fyers posted looking for her so I called the # and her owner came and got her. They told me her name was Tizzie. I liked that name. I fell for Tizzie because she was sweet and her face was slightly flat which made her so pretty and special. Before they left with Tizzie I asked where they lived and they said @ the end of the block. About 4 mos. later or so, Tizzie's Owners Daughter knocked on the door and said Tizzie had babies and wanted to know if I wanted one. Well, I had since gotten a cat after the whole Tizzie thing so I said, "no, I better not." She asked if I wanted to see them so I said ok. That was clearly a mistake. When I got their I spotted a little Tizzie clone, only difference was Jezzie had long hair. Needless to say, I took Jezzie home! She looks like a smaller version of a Mane Coone, personality, looks and all!I named her Jezzie because it was close to Tizzie and thought it was a good fit for her.

He is adopted (don't tell him, he doesn't yet know he is adopted) and the Humane society had given him the name Perkins. Well I love to listen to Jimmy Buffett so he is Jimmy Perkins 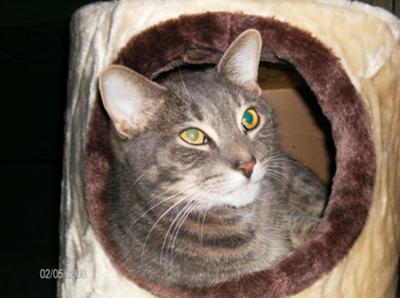 i named my cat this because if u have ever seen full house there is a guy named joey gladstone and he was my favourite character.also because there was a beatle song called get back jojoand his nickname is jojo. most of the time my mom and me like to name our cats after beatle songs like we had a cat named abby we named her after the song abby road and we had a cat named rocky we named him after the song rocky raccoon. 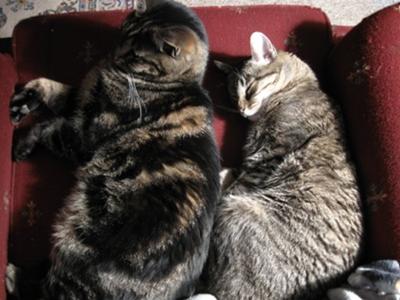 JoJo (11 yr old tabby female) came to us from the shelter with her name already. As she was 2 yrs old, we decided to keep it. George (6 yr old tabby male) got his name because he is big, lovable and dumb as a rock. He reminded me of the cartoons of the snowman from Bugs Bunny when I was little ... "I will hug him and squeeze him and call him George"

As soon as I saw her, I knew she would bring me years of Joy so her name was fairly obvious to me and it is also a person's name 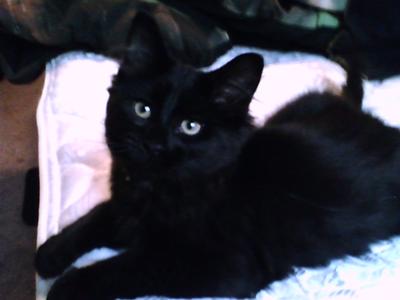 I love the song "hey Jude" and tried that for a bit and fell in love with it. I do nick name him meow mix thought. :)

This cat belonged to a woman who was renting a room in the house behind us. We'd leave the door to the house open when the weather was nice, and one day, the cat wandered in. After that, the cat visited regularly, made himself at home, and sometimes stayed the night. Eventually, his owner moved away, but he decided to stay with us. His owner had named him Panther, but we thought that was too obvious and not really his character, so we called him Juju. Sometimes he was "Bad Juju!" but mostly he was, "Good Juju." We did consider him good Juju because he chose us. 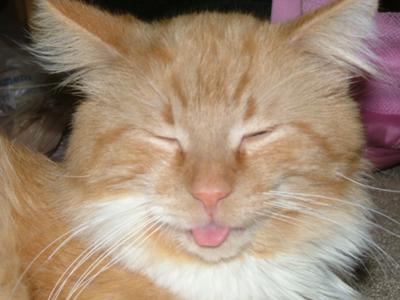 We named him Julius because he is a big beautiful orange Maine Coon. And the name Juleus sounded kind of regal to us. Not to mention, we love Orange Julius'. 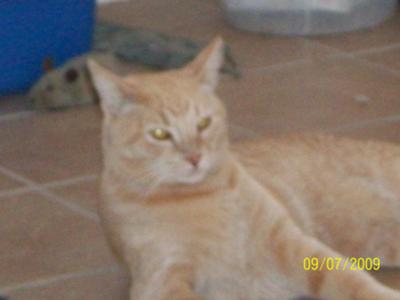 We got him when he was a kitten. We didn;t know if he was a boy or girl. We named him Juliet but after awhile we noticed he was a HE! So we switched it to Julius. 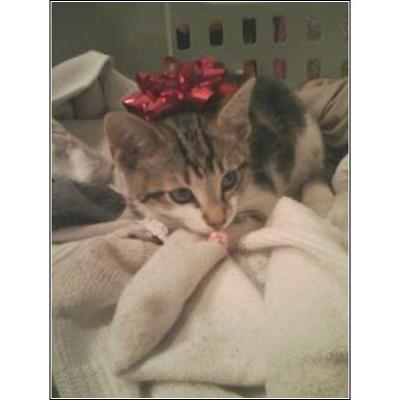 by Adriane Lohsl (Frankfort, IN USA)

We wanted to name our cat something that was different, but wasn't too off the wall. And when we brought him home... all he did was jump. Whether it be on our laps, shoulder, or head.. there he was jumping for our attention.

His middle name Roo... also descibed his jumping abilities. It was stolen from the kangaroo kid character "Roo" from Winnie the Pooh. Hence you have Jumper Roo.

Because i wanted to give the rodents that occupied my basement the justice that they diserved.