Cat names beginning with the letter Y are not that common but still lovely cat owners have submitted their own feline names for you to choose from. 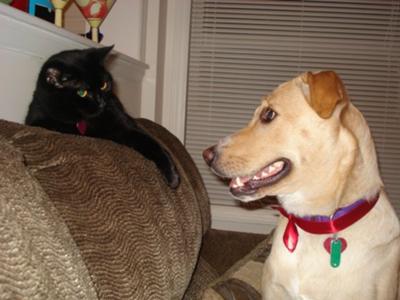 We were watching Chasing Amy and noticed that Amy backwards is Yma. It fits her personality perfectly!

I'm guessing that Amy is the dog :). they look like good friends these two, although has Yma just swiped the dogs nose. You would think that dogs would learn that cats like to scratch a nose.

When he was a kitten Yoda had a big head and his little ears wouldn't point forward. They pointed straight sideways like the Yoda character on Star Wars.

He had ears that reminded me of Yoda of Star Wars

As in "yoshimi battles the pink robots" the album/song by the flaming lips. there's something about it that sounds so feline!

I don't know the song by the flaming lips but I do like the band. 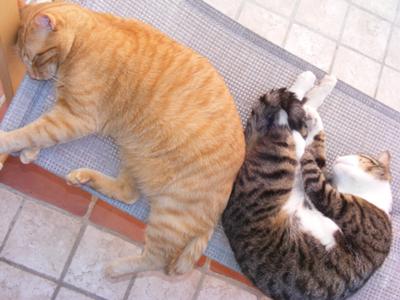 Yucky and Simon are adopted brother and sister. Yucky and Simon arrived home in June of 2007 each at 6 weeks old. Yucky was from a litter found outdoors and Simon came from a home of domestic cats, we found both through the local pet store.

Simon was named after other orange tabbies we have owned in the past and Yucky came because the word yucky is a slang word sometimes used when a person doesn't like something like peas for example. We live in Italy and the word was cute for a name here. Simon weighs in at 17 lbs and is like a tiger. Yucky is about 6 lbs silver, white and grey striped female. Simon and yucky are bilingual in Italian and American English.

Top of this cat names page