Cat Story
Cats Among the Cedars by Olivia Meynell

I love this cat story and would like to share it with you.  The author has allowed me to include a short synopsis of her book, if you would like to read more, the book is available to buy. 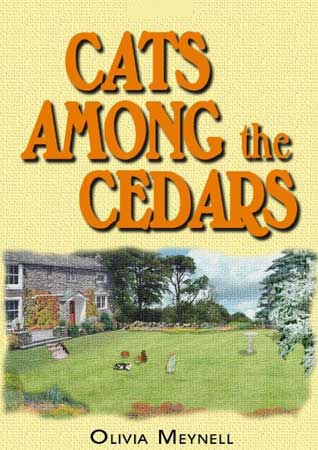 The cats had two sworn enemies. One was our next-door neighbour, Major Alfred Watson (retired).

Thickset, with a florid, red-veined face, bull neck, bristly white moustache, and bald as an egg, he was the stereotypical sergeant major, and rumour had it that that had been his true rank. Certainly, the stentorian voice sounded as if it had been accustomed to barking out commands on a parade ground. Keiran joked that the standard bay trees, which stood sentinel outside the Major?s front door, snapped smartly to attention whenever he emerged. A vigorous complainant, he had an abrasive relationship with the other residents of the mews, and had crossed swords with most of them at some time.

The cats were anathema to him. They were accused of leaving paw prints on the gleaming bonnet of his newly cleaned car, or using the plant troughs and borders in his minute, paved back garden as a lavatory and disinterring his bedding plants. They might well be guilty, as charged, of the first offence. As to the second, though I couldn?t vouch for Beau, I was sure that neither my own trio nor Thi-Minh were the culprits as, even by day, they preferred to relieve themselves indoors in their litter trays, rather than in a damp and draughty public loo. But I knew that it would be futile to argue that the cats of the mews were not necessarily responsible.

There were other cats in the neighbourhood. Profuse apologies, explanations that it was difficult to impossible to confine a cat to its own premises, were ill received and offers to replace any damaged plants (none of which were ever presented in evidence) were not accepted. Even the sight of a cat innocently strolling across the courtyard or sunning itself outside its own front door was enough to send the Major into an almost apoplectic rage. Furious rapping on his window would send the cats scuttling.

The exception was an unneutered tabby-and-white tom, a big bruiser with a mean face and a head as large and round as a prize turnip, the kind of cat that would chew up Rottweilers and spit out the bones. Not knowing his given name, we had nicknamed him Ivan the Terrible. My goodwill toward all cats did not extend to Ivan. He was the scourge of the neighbourhood, a thug with a price on his head for the cats he had beaten up. We swore that he was on the
payroll of a local vet, who must have done a brisk trade in repairing his victims.

Whenever Ivan appeared, looking for trouble, the resident cats (even Nosh) would vanish discreetly indoors, and the mews would take on the appearance of a Wild West town after the ?baddie? has ridden in. Ivan would swagger arrogantly down the length of the mews and leave his calling card and di-stink-t odour of Eau de Tomcat. His favourite stratagem was to hide under a parked car, waiting to ambush an unwary cat, and whenever I heard the dreaded sounds of strife I would rush out to separate the combatants before Ivan did the other cat a serious mischief. He would stand his ground, with a malevolent look in his eyes, hissing. Once, he backed off, not in retreat but ready to spring at me, eyes narrowed to basilisk slits, his lips curled back in a snarl, displaying a very impressive set of fangs, and I grabbed a mop and swung it at him. 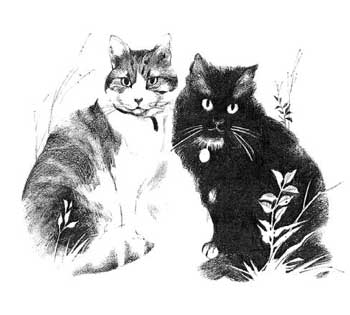 After that I kept a couple of water pistols primed and ready for action. I became a familiar sight, chasing after Ivan, firing from the hip, like Annie Oakley, at his retreating backside. I hoped fervently that none of my neighbours could lip-read the volley of invective I hurled after him ? or my graphic descriptions of the fate that awaited him (such as being skewered with the mop handle and kebabbed). Nosh would follow hard on my heels, with that devout coward, Ambrose, well in the rear. All that was needed was some suitable background music ? The Ride of the Valkyries, perhaps, or Suppé?s Light Cavalry, played by one of those elephantine brass bands.

It was due to Ivan that Ambrose finally mastered the cat flap. Pursued, he hurtled through it, slammed on the brakes and skidded to a halt on the tiled floor, just before he hit the opposite wall.

Ivan's response to the Major's outraged bellowing and banging on the window was a long, hard stare; then, with a sneer on his face, he would direct a derisive spray against a bay tree before sauntering off. By the time the Major, his face alarmingly empurpled, had burst out of his door, like a cuckoo from a clock, Ivan would be well out of range.

One afternoon I spotted him strolling through the mews, sniffing nonchalantly at the container plants. Suddenly, Arthur came around the corner. It was his first encounter with Ivan and, with the trust and confidence of a young cat who has known only friendship from his fellow felines, he made a beeline for Ivan, his tail raised in greeting.

By the time I reached the door, Ivan had pounced and sent him sprawling. Ambrose, ambling round the corner, took one horrified look and hastily reversed, suddenly remembering an important appointment elsewhere. At that moment, Nosh materialised behind Ivan, metaphorically spat on his paws, flexed his muscles and, with a growl like a rumble of thunder, launched himself at the big tabby.

Taken by surprise, Ivan was lifted clean off his paws, as if a torpedo had hit him amidships. His head hit the wall with stunning force. You could almost see galaxies of stars twinkling above it. I wondered whether to offer aspirins and Elastoplast. I swooped upon Arthur and snatched him to safety. To my surprise and relief, he appeared unharmed.

As Ivan lay there, dazed, with all four legs pointing heavenwards, Nosh (with a blatant disregard for the Queensberry Rules) set about giving him a no-holds-barred hiding of his life. Even Ambrose carried away by the excitement, took the opportunity to put the boot in. Then, overcome by his own daring, he legged it back to join the goggle-eyed Arthur, and bravely cheered Nosh on from the safety of the ringside seats. All they needed was a packet of crisps and a can of lager apiece.

van finally managed to break free and, deciding that losing face was preferable to losing other parts of his anatomy, he did a vertical take-off and zoomed away like a misguided missile. Nosh streaked after him. I picked Arthur up and cuddled him. Was it something he'd said, his bewildered expression asked. Presently, Nosh sauntered back, looking pleased with himself. Ivan was probably still orbiting Mars.

Remodelled his face, free of charge, and ran him out of town, he told us tersely, as he, figuratively, hitched up his fur trousers, dusted off his coat and removed tufts of tabby fur from between his claws.
Revenge was sweet. He had settled old scores.

Nice work, Sheriff, said Ian, admiringly. You're one tough hombre. Nosh looked smug. A force to be reckoned with, he was. This, as Sir Winston would have said, in that famous Churchillian growl, was his finest hour. What a team we make, said Ambrose happily.

With the muscle of the Mews Mafia, the Cosa Noshtra, to call upon, Ivan figured that Arthur was not for beating up. Not only had Ivan's street cred fallen to an all-time low, he had become an endangered species. We occasionally saw him slinking past the entrance to the mews, but, to our knowledge, he never set paw within its boundaries again.

A great cat story I hope you agree and the book is well worth reading in full (available as a book or as a kindle edition). If you are a cat lover like myself then reading a cat story like this will be right up your street as they say.

If you know of a cat story that other cat lovers would enjoy, please let me know and I will include it on the site.

Back to top of this cat story page