Feral cats lead horrible lives simply because in some areas there are simply too many of them and this can lead to starvation, fight wounds and eventually an early death. Female feral's live their lives permanently pregnant, becoming weaker and weaker with each litter.

Sounds horrible doesn't it and I'm sure if you are a cat lover, the thought of our furry friends leading such harsh lives is something hard to bear.

I can hear some of you saying but aren't feral's just wild cats as nature intended?

Well yes but because we humans have changed the world and have provided lots free food lying around in dustbins and kill many of the cats natural predators, the number of feral cats has increased to such  a level that the balance has been altered and so they no longer lead a "natural life".

The number of feral cats depends on where you live. In the U.S it is said to be tens of millions and I'n sure there are many countries with a similar large number.

What Is a Feral Cat? 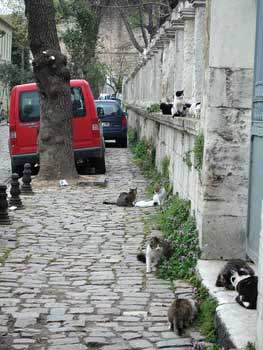 There are two types of feral:

A stray cat is a cat that has lived in a family home for most of their lives and have probably only been living alone for a short period of time. These cats are still heavily reliant on humans for food and comfort and will seek out humans.

Most feral cats live in large groups known as colonies. These colonies gather n areas where food is readily available, often on farm land where rodents are prolific or urban areas where rubbish cans provide lots of tasty morsels.

What Can We Do About A Feral Colony?

Unfortunately there are some people who think the best way to get rid of these wild cats is to simply kill them off in large numbers. Often these methods are cruel and I won't talk about them here. However this method very rarely works in the long term. With other cats moving into he now vacant territory within months. 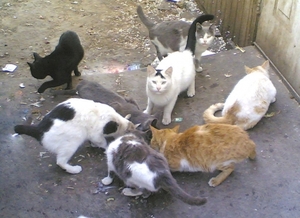 The best method for controlling these cats is called TNR. It is a safe and humane system where by the cats are trapped in cages, taken to a vet and neutered or spayed and vaccinated and then released back to the area they came from. A caretaker is also appointed to provide the colony with food and some shelter. They also monitor the colony to check for illness.

This method allows the cats to live out their lives whilst not growing the colony.   Their lives are also more comfortable as they are provided with food and shelter in cold weather.

If you have a feral colony living near you, your best option is to contact the largest animal rescue organisation in your country and speak to them about TNR. They will be able to provide you with all the information in your area.

How do I keep these cats away from my property?
One thing that cats don't like are strong smells like citrus, or loud noises or even getting wet. There are many cat repellents available which can be used around our property to deter them. Such as motion sprinkler systems, sprays and crystals and even cat scarers.

However if there is a large colony of cats then TNR is also worth thinking about in the long term, as this will decrease the population over time.

Can I Tame a Feral
A true feral will not make a very good pet at all. In fact it is very unlikely that you will even be able to get very near to them at all.

It really is not advisable to try and tame a feral or even try to touch them. The likely outcome could be a nasty scratch or bite.

However some feral's may not have always been wild and with a little persistence over time they may once again allow some human contact. It will be obvious after a little while which ones may eventually become friendlier and allow you into their lives, just a little perhaps.

However...
In reality most of the feral cats you may see around will always remain wild and live outside and because of this the best thing you can do for them is to have them neutered or spayed. Contact your local vet for help.

Top of this Feral Cats Page