The Story of Our Little Tabby Cat, Mo.
A very Happy Cat Indeed

You would think that one little tabby cat wouldn't be that different to the next. But how wrong you would be. I have yet to meet two cats the same. I've known cats who treated us as a necessary nuisance, crazy cats who thought they were human too and others, who I'm sure just humoured us poor human beings.

Let us introduce you to our current tabby cat. Mo. To be honest she is not completely tabby, she has large amounts of white fur as well. A real moggy cat. We will tell you her story and how she came to be with us.

My partner and I had just moved in together and decided that a home wasn’t a home without our very own cat. We live in London and so decided to visit Battersea Dog and Cats home.

You may have heard of it, it’s quite famous and has been running for 140 years. We knew that if we re-homed a cat from here that it would be healthy and neutered, and would have been looked after by them very well. 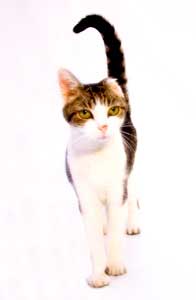 For some reason we both wanted a little tabby cat boy. We had lived with other male cats before and thought they would be less fussy than a female cat. So as luck or fate would have it, when we entered the kennels they had only female cats looking for homes.

Some even had kittens in tow. We decided that it would be mean to go home empty handed, when all these cats deserved a home and anyway, they were all really cute cats.

Mo The Little Tabby Cat or Should I Say Lady 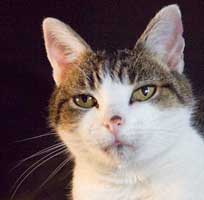 After spending quite some time wandering around the cages cooing and ahhing at all the hopeful faces, we came across a rather aloof looking little tabby cat sitting at the far corner of her cage.

We put her in a carry box and took her home that same day. She didn’t make a single sound all the way home and held her head low. She really did look like a very sad little tabby cat.

We found out that she had been found wandering the streets and had either been abandoned by her family or had got lost, as she was a domesticated cat and not a feral. She obviously felt very scared and alone. 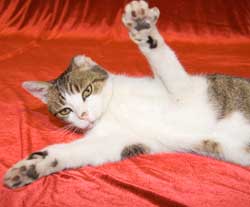 We got Lady home and took her out of the carry box. She sat on the carpet for a moment and then something very strange and fantastic happened. The expression on her face suddenly changed.

It looked as if she realised that she was home. One minute she was a very sad and depressed cat who had nothing to say for herself, the next she was rushing around the room exploring every corner, her tail was up and you could see her relax.

Then she looked at me and Matt, who she had hardly even noticed. Before we knew what was happening she was all over us and meowing like mad. She was like Velcro, wherever we went she went too.

If you sat down she was on top of you, rubbing all around us and kneading our legs with sharp little claws. We had difficulty in not tripping over her all the time as she just didn’t want to let us out of her sight. She was home and she was a very happy little tabby cat indeed.

A New Beginning For One Very Happy Little Tabby Cat 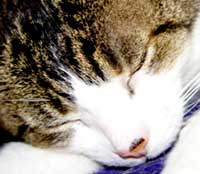 We soon discovered that the name she had been given at the centre of Lady just didn’t really suit her. She was far to loud mouthed and gregarious to have such a genteel name.

She was an exceptionally petit and little tabby cat and so we decided to bizarrely call her Mouse or Mo for short. I’m sure if we had a dog we would call it Cat.

After the three week settling in period we thought it was safe to let her venture outside for the first time. Which when we did she promptly disappeared.

For three days we searched the neighbourhood, fearing that she had either got lost or injured and that we were bad people. But then as we came home from work on the third day, there she was sitting on the fence waiting for our return.

She was absolutely black with dirt you couldn’t see any of the little tabby cat markings at all. Goodness knows what she had been up to. She looked at us with a big smile as if to say that was fun and promptly demanded to be fed. Big Time. We soon discovered that she had been out claiming her new territory and despite her small size had been beating up all the neighbourhood cats, making sure they knew who the top little tabby cat was.

A Little Tabby Cat With A Big Personality

The first time you look at Mo, apart from noting how small she is, you notice her big round eyes heavily made-up with Cleopatra like eyeliner. I think that is what makes her look so beautiful and she knows it.

She can certainly turn the cute cat factor up to warp number 11. In fact we are always accusing her of practising her cute looks, because it is certainly getting harder and harder not to give in to her every desire and whim.

She also has a crooked front leg, which doesn’t seem to give her any particular problems. We checked with the vet and he thinks she may have been born that way. Just another thing which makes her unique I guess.

She has other funny little ways too. She always follows us down the road and waits for us at the bottom until we return. Once when we were driving away in the car, we spotted her in the rear view mirror sitting in the middle of the road looking after us. It nearly broke our hearts.

Although she does not behave much like a lady most of the time, the one thing she does insist on is that we only serve her fresh water in wine glasses. They must be also placed in several places around the house, as one day she feels like drinking in the bedroom and another in the lounge. In fact she changes her mind almost daily as to where she wants her wine glass placed.

Mo Has Had Her Health Problems Too!

We have sometimes wondered if Mo was the runt of the litter as she is a very litttle tabby cat and her health has always been rather delicate. For the first few months of living with her we discovered that all was not well with her.

We would often find piles of sick on the stairs every morning, we used to call her little miss chuck up. Then we would find spots of blood everywhere and would notice her straining to urinate.

We took her to the vet who couldn’t find anything particularly wrong with her, but thought that it could be the food we were feeding her. He recommended another brand of wet food to try.

Nothing changed. We notice however that she would gulp her food down really quickly without chewing it. Could this be why she was vomiting? Also she never drunk anything, could this be causing a urine infection?

So we tried feeding her only complete dry food, no wet food at all. She had to chew this and also as it was dry we hoped that it would make her thirsty. Almost over night the vomiting stopped and so did the blood spots and urine problems.

She now drinks all the time and has never had the problems return. We were worried at first that it was not good for her only to be eating dry food, but after 11 years she is still fit and healthy.

As with many cats, Mo absolutely loves the sun. In fact we have noticed that during winter or cloudy overcast days she definitely is not her usual happy cat self and seems really down.

But give her a little sun and she is a kitten again. However be warned, danger lurk in those sunny summer days. We will tell you Mo’s sorry tale in the hope that you can spare your cat the same fate.

Mo, although a little tabby cat, also has lots of white patches. Including her ears. We never gave it a second thought when we saw her year after year sitting in the sunniest part of the garden. Looking very much as the cat that got the cream.

However we did notice little scab marks appear on her ears every now and again. Well one of these scabs started to grow into a lump. Very slowly at first, in fact I don’t think we took much notice of it at all. When it got to the size of a pea, we thought this is not good and it doesn’t look as if it’s going to go away.

The vet took a biopsy and luckily told us that it was not malignant but that it would keep on growing if we did not have the lump removed. So in she went for a operation. All went well and you could hardly see where the lump had been.

Then next summer, it was back and this time it grew really quickly. Poor Mo would catch her claws on it and make it bleed. This time we had to make the decision to have the ear removed.

We felt so guilty, we just hadn’t thought that all that sun bathing would cause such problems. Now even when the sun looks like it may pop it’s head out for a few minutes we rub sun cream into Mo’s good ear. The last thing we want is the same thing to happen again.

That’s Our Little Tabby Cat, Tell Us About Your Cat.

I hope you have enjoyed reading our little tabby cat story. Mo is still with us although she is now about 14 years old and doesn’t move quite as fast as she used to and maybe she likes the shadier cooler places to sit now.

She still tells us off all the time if we’re not quite quick enough at giving her food or if we move around too much at night and disturb her sleep. She is very much a part of our family and long may she be so.