Soxalone the cat is my cat my name is Fran.

He is 15 months old and lives with me in the UK.

His favourite food is:
Apart from just about every kind of wet and dry cat food,he loves brown bread,cheese,carrot cake,white chocolate and chocolate mousse!

This is what I like doing the best:
Sleeping on the window ledge,watching anything that moves from his window seat,being brushed and combed and eating

His funny habits are: He loves to have a shower. At dinner time he jumps onto a dining chair,looks to see what we are having for dinner(never touches)once he`s had a look he jumps down and goes to eat his own dinner!

He sits when told and will stand up like a meer cat on his hind legs till he gets a cat treat. And he likes to sleep in the wash hand basin in the shower room,although he has beds and baskets everywhere! 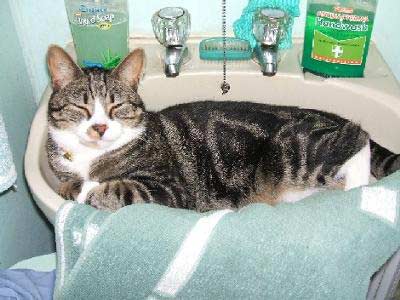 How I found Soxalone the cat:
He was one of 3 wild farm kittens,that were going to be put down..only wanted one really,but ended up with all 3.Sadly 2 have been killed on a nearby road in the past year.

Soxalone is the last surviving cat of three wild farm cats(from the same litter) that I saved from being put down.They soon became wonderfully tame and were all extremely close.They were all loved dearly and of course spoiled!In the past year, two have been killed on the road nearby.

Soxalone has not only had to deal with losing his brother and sister and being an `only` cat,but also I have now decided to keep him indoors at all times (He does have a large built outdoor run,when weather permits)

I don`t think he realises it`s for his own safety;but he`s certainly adapted well and quickly to his new surroundings and status of "Ruler of the Roost" and doesn`t he know it!He does virtually as he pleases and lets you know exactly what he wants and when!

He has beds,baskets,pillows,blankets in all the best spots around the place..but where`s his favourite place at the moment?Wash hand basin in the shower room! Handy I suppose as he adores having a shower.

He`s always been called Sox,we`ve added the"alone" to his name,which he answers to just as well as Sox. 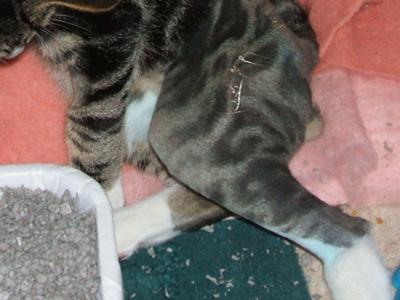 When Soxalone was just under 6 months old,he was playing in a nearby field and managed to get trampled by a cow(as far as we know)he came crawling back home and we rushed him to the vet.
We have a marvelous veterinary hospital very close by.He had to have his leg pinned in places and a stay in the hospital,where we visited him every day.Once home he had to be kept in a pen and keep the weight off his leg until it was fully healed,about 8 weeks.

He was so incredibly good throughout this time and also with all his visits to the vet during this time.The pet insurance didn`t begin till they(we still had the other two kittens then) were 6 months old..he was just under the 6 months.

His treatment cost just about £1000. I never begrudged one penny of it.He thinks he`s bionic now..and leaps from the ground several feet up onto the top of the bookcase,no problem.
People around here refer to Soxalone as the most expensive cat in the neighbourhood;and everyone loves him to bits;but not as much as we adore him. 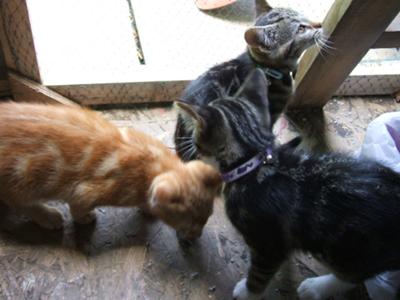 Soxalone was one of three wild little kittens;matted fur,full of fleas and worms.(Soxalone is the one with his back to us wearing the white socks!)they soon all learned not to bite the hand that feed them and became a loveable,friendly,close little trio.
Soxalone(who was just plain old Sox then)was always the biggest and the ring leader of any mischief they got into;maybe we should have called him Rambo;he was always the big,rough tough guy of the three.
They all became very close,the two brothers and little sister from the same litter and after a week or so you would never think they had been completely wild and petrified of humans.
These days Soxalone thinks he IS a human and loves having his gleaming coat brushed and combed.

So what`s the hold up? 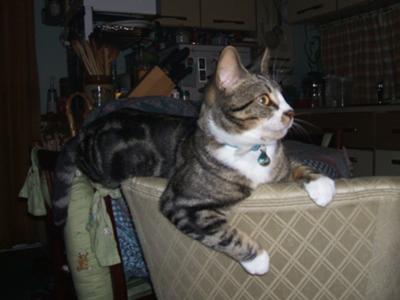 Soxalone the cat loves his nightly brush and comb;he`s sussed out that he usually gets it when I take off my glasses in the evening,so then he jumps up onto the chair he likes to drape himself over while he gets his brushing;if I`m not quick enough for his liking he just hangs himself over the back of the chair waiting,looking at me and meowing.

If that doesn`t have the desired result fast enough for him he goes and picks up his brush and throws it down by my feet!

He usually gets about half an hour of brushing and combing,we both find it really relaxing and of course we don`t have everything covered in cats hairs,well only a few!

After I`ve brushed him he half heartedly gets up a takes a turn around the floor with his head held up high,as if to say "Don`t I look lovely!"

Top of this Soxalone the Cat Page