The Bengal cat breed has been around since the 1960's where it was started in Arizona in the United States.

However the idea of breeding hybrid animals is not a new idea and there are even records stretching as far back as the 1880's suggesting that there was an early attempt at a similar breed of cat.

This is a beautiful cat and one that turns heads whenever you come into contact with them. This makes them a very desirable cat to own, but they are not low maintenance and very careful consideration needs to be made before deciding to have one.

The idea behind the breed is to create a cat that has the looks of a wild leopard cat but that has the temperament of a domesticated cat. 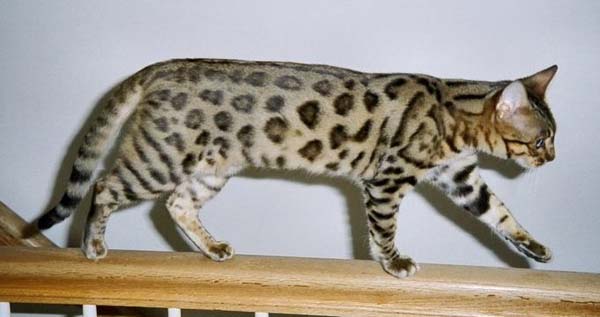 Early attempts were met with some concern as many of the first litters were proven to be unfertile and so could not continue the breed, plus their temperament was unstable and so not suitable for the domestic market. However the modern Bengal is now starting to establish itself and be accepted by the cat associations as a recognised breed.

The breed is very popular due to their adorable looks and so over the years the demand and so the prices for these cats has increased.

The cat has a very striking appearance; it has a long sleek body and is rather muscular. It has smallish pointing forward ears and its fur has a texture more similar to a wild cats pelt rather than the domestic cats fur.

See this book for more information about this breed.

Looking For A Gift For A Owner of This Cat Breed?

I have several friends who own Bengal's and I know just how much they love them. So when I was looking for a gift for them I was delighted when I found this lovely little ornament.