The Siamese cat breed was first described in a 15th century Thai manuscript and in fact the seal point was the official cat to the king of Siam.

The belief was that the cat could aid the deceased sprit into the next world and so the cats were often buried with members of the royal household.

Evidence of holes made in the roof of the tombs further enhanced this belief as it was believed that this indicated that the cats had taken the souls through to the after life.

The first breeding pair of Siamese arrived in Britain during 1884 and were of the traditional variety which were stocky, with rounded heads and with quite small ears. They also had a pronounced squint and a kink at the end of their tail.

Modern Siamese are quite different and have long bodies with dainty oval paws. They have a wedge shaped face with pronounced large ears. 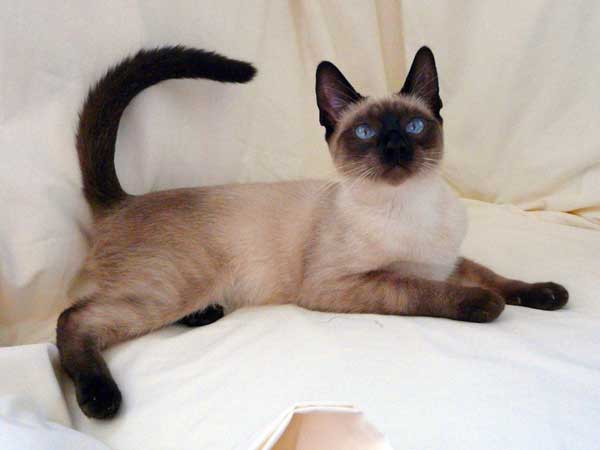 The colour variations of this cat breed are known as:

Chocolate point - Paler coat than the seal pint and the pints are a lighter chocolate colour.

Lilac Point - A slightly off white body colour with frosted blue/grey points. There is a touch of lavender in the point colour and has matching lavender/pink nose and paw pads.

Cream Point - This is a dilute version of the red point. The cream on cream has a very subtle tonal difference.

Tabby Point (Lynx Point) - The tabby point can come in many different colour variations. The cat breed has tabby markings on forehand and tail.

Tortie Point - The colour points are randomly mottled with shades of red and cream.

More information on the types, colors, behavior and temperament of these beautiful cats (as well as what it's like to live with one!) can be found at Life with Siamese Cats.